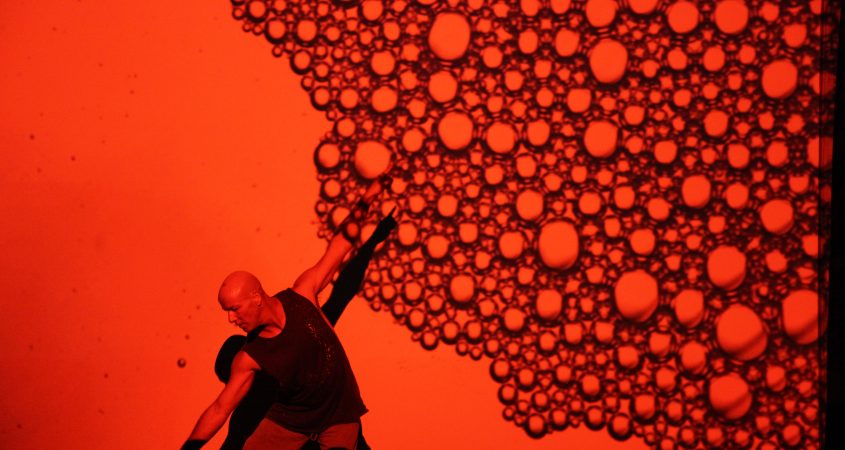 In August, Tuggeranong Arts Centre will present Blood on the Dance Floor – a piece of autobiographical theatre based on the lived experience of artist Jacob Boehme.

A choreographer, dancer, and writer from the Narangga and Kaurna nations of South Australia, Boehme was diagnosed with HIV in 1998. In search of answers, he reached out to his ancestors. Through a powerful blend of theatre, image, text, and choreography, Boehme pays homage to their ceremonies whilst dissecting the politics of gay, Blak, and poz identities.

We asked Boehme some questions about the show, why it continues to resonate with audiences, and his ongoing work combining art and activism.

Blood on the Dance Floor debuted at Arts House Melbourne in 2016 before going on to Carriageworks for Sydney Festival in 2017 and has since toured both nationally and internationally. The show is described as, “an unapologetic, passionate and visceral narrative that traverses time, space and multiple characters”.

With the tour several years on, Boehme still believes the story is important to audiences today.

“After 30 years of dealing with the global epidemic of HIV, the experiences of stigma, discrimination, and silence around the HIV virus are just as present today, and are still being felt by people living with and affected by HIV/ AIDS,” Boehme says

“By sharing my personal story, unapologetically, of being Blak, gay and poz, Blood on the Dance Floor is an opportunity to create a space for our mob to have a voice in the dialogue around HIV. A conversation at a table we have not been invited to in this country, which has so far been led by, and reserved for, gay white men.

“Our mob have been dealing with HIV right from the early days. Back in the ’80s, mostly silently and with shame,” Boehme continues. “And we are now seeing a spike in detection rates here in the state of Victoria, particularly among Indigenous women and IV drug users in our community. Now, more than ever, we need to take our seat at that table, our silence broken and our voices heard.”

Not content with keeping the message local, Boehme recently toured the show to Canada and ran workshops with First Nation communities.

“Canadian First Nations communities, much like our communities here, have been dealing with HIV since the early onset of the virus,” Boehme says. “Canadian First Nations peoples make up 10% of HIV diagnoses in Canada, which is a staggering over-representation of a people who, according to national demographics only make up 4.6% of the population. Most of the cases of people living with HIV in the Indigenous community are either women, intravenous drug users or both.

“Canada also has a high population of youth living with HIV,” he continues. “A good proportion of those are born with the virus. Issues of stigma, discrimination and a lack of appropriate resources to service Indigenous communities with cultural sensitivity is just as current, relevant and urgent there as it is here.”

Further to Blood on the Dance Floor, Boehme is also working with Tuggeranong Arts Centre and the ACT Aboriginal and Torres Strait Islander community as part of a longer project called The Blood Library.

“With new statistics released by the Kirby Institute in July 2019 exposing our community as a higher risk group for HIV detection and diagnosis, the work I am undertaking with Tuggeranong and the ACT Indigenous community will be looking at how we can work together as a community of Aboriginal and Torres Strait Islander peoples living with HIV, and with our families, friends and allies, raise more awareness and education around current and improved HIV treatments and prevention,” Boehme says.

“We need to mobilize as a community, using the lived experiences of our brothers and sisters who are living and thriving with HIV, to lead a new age of sexual health awareness that is self-determined and culturally appropriate.’

Finally, given Boehme’s practice as an artist, and that The Blood Library this is being developed with the Arts Centre, what role will art play in developing and disseminating this messaging with the community? And what kind of artistic outcomes does he envisage from project?

“Art has played a central role in public awareness and education around HIV from the early to mid-1980s,” Boehme says. “From the AIDS Coalition to Unleash Power (ACT UP) demonstrations in New York City, to the effective yet horrifying messaging of the Grim Reaper campaign here in Oz, to the art in education street and puppet theatre across Africa and India, art and creativity have been essential to sharing knowledge and building understanding.

“There are a variety of outcomes I would love to explore and develop with the ACT community. Storytelling and sharing our experiences can come in many forms: through dance and theatre performances, the design of a new poster campaign for youth, the publication of a photographic journal, the production of cultural objects and ceremony to honour our friends and families. These are but a few ideas to create a living collection of memory, histories and stories to build The Blood Library.’

While The Blood Library is still in the early stages of development, audiences keen to experience Boehme’s work can catch Blood on the Dance Floor at Tuggeranong Arts Centre at 5pm & 8pm on Saturday 24th August. Tickets are $30, or $25 concession, and can be booked at www.trybooking.com/BDNGI