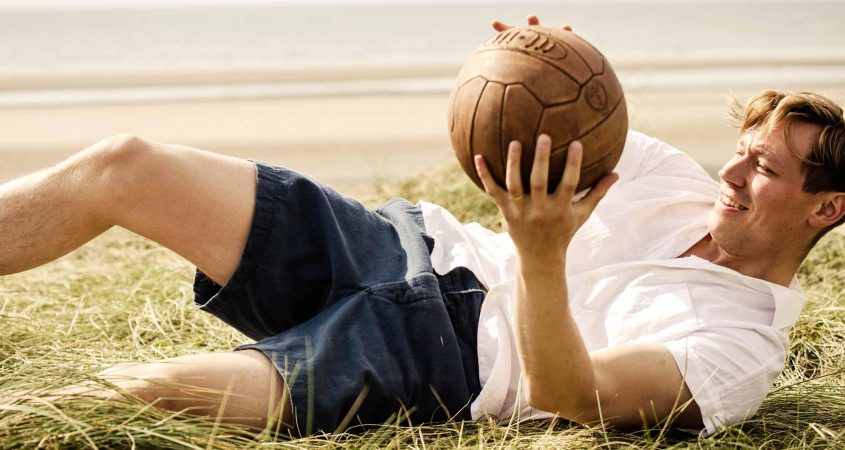 Bert Trautmann (David Kross) is a German soldier in an English Prisoner of War camp in 1944. Bert Friar (John Henshaw), a grocer who delivers produce to the camp, is manager of the local football team. During a visit to the camp, Bert spots Trautmann goalkeeping in a football game, and, recognising his talent, decides that Trautmann could be the player he needs in order to win the forthcoming football tournament. He takes on Trautmann to work for him outside the camp and offers him a chance to play for his team. Trautmann, initially reluctant, eventually agrees on his own terms.

As expected, there is considerable resistance from the team and the locals to having a German soldier in a British football team. Many have lost loved ones and are living with the privations arising from the cost of the war.

To add a further complication, Trautmann has fallen in love with Bert’s initially hostile daughter, Margaret (Freya Mavor), and this relationship, too, is put to the test by those objecting to a British woman’s being with a German.

Trautmann is eventually accepted by his teammates, and during one of the games, is talent-spotted and given the opportunity to play for Manchester City. But further difficulties lie ahead, after revelations that Germany awarded him the Iron Cross.

David Kross portrays Trautmann, a complex man who faces his external and internal struggles with grace and fortitude, brilliantly.

John Henshaw is excellent as Bert Friar, and Freya Mavor gives an engaging portrayal as Margaret.

The film realistically captures the look and feel of an English rural village during WW II, the P.O.W. camp’s petty tyrants and ugly true Nazis, and the difficulties of life during the post-war years.

Based on the true and remarkable story of Bert Trautmann, Manchester City’s legendary first German goalkeeper, The Keeper is an engrossing drama worth seeing.