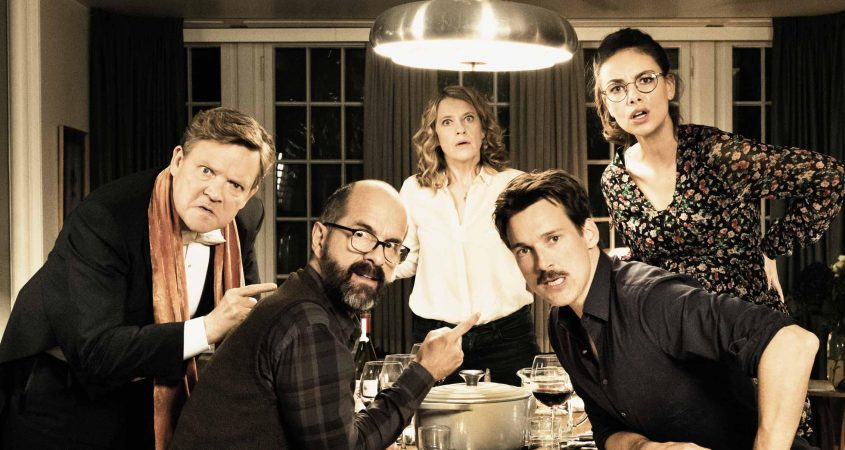 Stephan (Christoph Maria Herbst) and his wife, Elisabeth (Caroline Peters), have invited their family and friends for dinner.

René (Justus von Dohna’nyi), adopted family member, confidante of Elisabeth, and all-round peacekeeper, arrives and takes his place in proceedings as usual. Elizabeth’s brother, Thomas (Florian David Fitz), joins them and announces that his heavily pregnant partner, Anna (Janina Uhse), has to work overtime and will be arriving later.

The evening starts out as the routine family get-together with the customary quips and mild tensions, but things go awry after Thomas shows everyone the latest ultrasound scan of his son and the conversation turns to the naming of the new baby. Thomas suggests that everyone guess the name, and hints that it begins with an “A”.

When Thomas eventually reveals the name “Adolf”, the evening turns progressively unpleasant as reactions to the name gradually provoke everyone beyond his or her limit. Assumptions, resentments, honourable and dishonourable behaviour, unkindness, and blinding egotism emerge raw and exposed from beneath the veneer of politeness.

This excellently cast and directed film is a serious, if sometimes humorous, exploration of an aspect of the legacy of one of the worst dictators to ever live, and of how something as everyday as the choice of a baby’s name can divide a family strongly enough to have it teetering on a brink from which there’s no return.