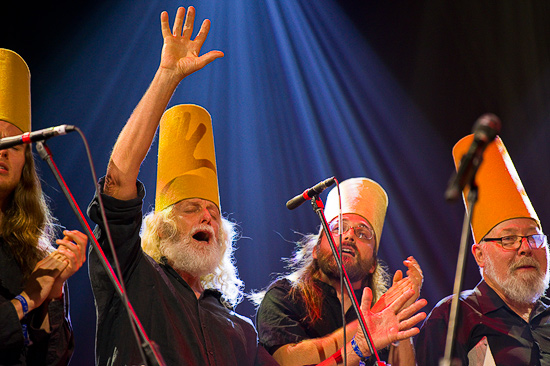 Another National Folk Festival has come and gone, leaving in its wake memories both of performances to make you wonder and of the National’s reliable air of bonhomie and whimsy.

After a brief introduction to the Truman Smith Band, Bluegrass Parkway, and half a dozen other performing troupes at Thursday night’s opening concert, Friday saw full performances by dozens of performers, including delightful sets by festival favourites Lucy Wise (in a trio) and John Flanagan (in a new trio) as well as an annotated musical journey through copyright conflicts illustrated by Shortis & Simpson’s Worldly Goods Choir.

Also well worth hearing were the Kate Pass Kohesia Ensemble and, of all things, an opera: Gilbert & Sullivan’s jolly Trial by Jury, with a cast of 18 and an orchestra of seven, together taking the name Loosely Woven. Audiences were also treated to some old favourites, including Rory McLeod, Guyy and the Fox, The Spooky Men’s Chorale, and The String Contingent.

And these were just Friday’s highlights.

Over the entire long weekend, musicians new to the festival stages performed repeatedly, including JigJam, ABRASKA, ELSKA, and The Fagans, and many more made themselves known to audiences through the remaining Infinite Glam Rock daily heats and finals. Through an irreproducible weekend, I found myself exposed to the energy of Scots group Mánran; the fabulous danceable interweavings of the four-piece Malumba; the surprisingly Celtic sound of the Japanese band John John Festival and the rocking Celtishness of Kittel & Co.; the quiet delights of the PK Wrigley Skifflejuggers; the bouncy vocal harmonies of Green Mohair Suits; and literally dozens of others.

And it’s always fun to catch the daily heat of the year’s themed “Infinite” competition — this year’s being the Infinite Glam Rock competition — in which every entry gets a good laugh. (It was as an entry in one year’s “Infinite Bee Gees” competition that the Spooky Men’s Chorale devised the now legendary Ba’hari Ghibb. If you haven’t seen them perform it, catch up with it on your favourite video site.)

Every year, too, brings fresh and exciting combinations of favourite musicians. This year, for instance, John Schumann (Redgum) and Shane Howard (Goanna), backed by their new six-piece backing band, the Red Rockin’ Dirt Band, combined their brilliance on dozens of numbers in two unforgettable concerts.

Possibly the biggest surprise of the festival, though, was the sophisticated, energetic, sound of Yolngu musician Gawurra. This is somebody to watch.

With 15 stages going all day and 11 going all evening, there’s something for everyone’s tastes all the time, most surprising being the range that apparently falls within “folk”: from classical, fusion, and jazz to a good deal of driving alt-country music sounding very like well-formulated rock.

The festival’s one regrettable aspect was that certain performances were so amplified as to be agonising. In two venues, it actually blew speaker cones. There were plenty of formal complaints about it, and I think it may be time for festivals and other music venues to take practical action to protect client health and safety.

Musical performance isn’t all that the festival boasts, though. The festival shop houses the finest musical instruments; workshops teach everything from papier mâché and instrument making to comic songwriting and album financing; and, as always, there’s a great deal of dancing from mid morn to midnight — everybody welcome to join in — and children enjoy access to programmes of activities throughout.

And that’s to say nothing of the specialist groups that met, rehearsed, and performed, from the National Ukulele Muster and the Poet’s Breakfast to the Festival Choir and the NFF Percussion Experience.

When I first came along to the National, I kicked myself for all the years for which I’d imagined that it had consisted merely of performances by “folkies”. It’s far, far more, and not the least of it is the inclusive, warm atmosphere that permeates the entire event from beginning to end. I believe that not a few musicians purchase a season pass just for the opportunity to spend the entirety of Easter between sleeps jamming with others in the session bar. On a weekend like this, though, who even wants to sleep?