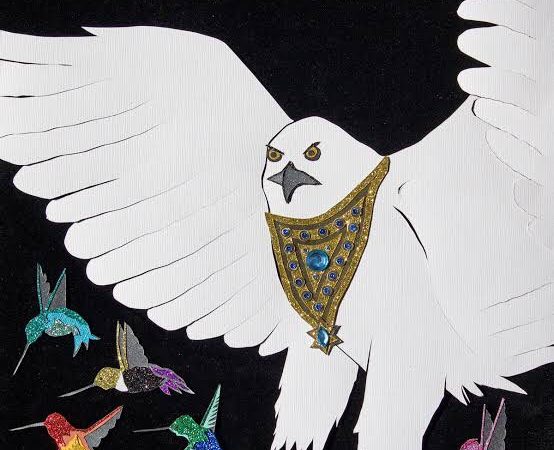 Jared Warren (bass and vocals) and Coady Willis (drums) are Big Business. A two-piece from Seattle, Washington who formed in 2003 and have steadily delivered a slew of EPs and now, courtesy of Joyful Records and Gold Metal Records, deliver their sixth full length record The Beast You Are.

Their second album Here Come The Waterworks was a bone fide mid ’00s classic and saw them join legends The Melvins for the Nude With Boots record and subsequent tour. Til then the band’s core of bass and drums and Jared’s powerful upper register vocals set the tone for their sound and they seemed to do no wrong.

In 2009 they changed the formula and added a guitar for Mind the Drift which polarised many with its departure from a sound that was too metal for punk fans and too punk for metal fans, arriving at something a little more slow burning with songs that leaned toward quirky territory. I still loved that album and reviewed it for BMA at the time.

They added a second guitarist for 2013’s Battlefields Forever announcing, with their tongue-in-cheek sense of humour, that they’d become a “power quartet”. In 2016 they returned to their two piece roots for Command Your Weather, and here we are.

The whole journey sees the band come as close to their Here Come The Waterworks as they’ve gotten in the 12 years since its release. The vibe and delivery is the most refined Big Business has been following a decade of experimentation.

The addition of a Mellotron for this album influenced the songs by the way of looping. When I heard about that approach, I thought it would be limiting the freer spirit of two very dynamic musicians.

What it does instead is give Coady space to tell a story with his drums, with ever interesting variations and the hard hitting delivery that you’ve come to expect from one of the few drummers on earth that could pull off not just working with Dale Crover, but accentuating a master drummer’s work.

The band’s understated humour comes through in disturbing ways in the loops which give a sinister and slight drag time that add a psychedelic vibe. Bass sounds are primarily ripping and huge, and the vocals have that unmistakeable Warren delivery.

The material is sludgier than the last couple of records, but with less members it’s a tight, well delivered melodic sludge as opposed to the loose feedback soaked NOLA type. Abdominal Snowman kicks off and exemplifies this sound across the 13 new songs on offer here.

None of which never outstay their welcome, with a total running length of 44 minutes. There’s a few minute-ish long loops that break the songs up with some interesting musical ideas that aren’t tacked on, despite the risk of their presence feeling that way.

Heal The Weak might be the pick of the album for me, with its fantastic dynamics, from a crushingly epic opening riff, a really well placed quieter chorus section, and genius application of sleigh bells to see the songs way back into epic stomp territory.

Dynamic song selection works so well in the album space; the aggressive Bright Grey gives way to what I would argue is the best application of the Mellotron on the record with the disturbing stomp of Time and Heat giving way to the sinister bowed loop that runs through The Moor You Know.

Any time the pace slows, Coady can be relied upon to bring a big tom drum riff to pick up the energy, and as mentioned previously, he really seems to have a great time on this album. Check El Pollo for example.

Last Family furthers the case for catchy melodies having a strong place in sludge rather than relying on just crushing riffs to be effective. The great Under Everest brings the sleigh bells back for a quieter, almost Beach Boys inspired melodic ballad that evokes an unavoidable Christmas vibe.

Let Them Grind closes proceedings with an epic heavy banger that has such a killer last riff section that it must have been a natural and inevitable choice to close the record.

If you haven’t been back to Big Business for a while, it’s time to check in. They’re in great form, and their unique formula, while well understood at this point of their careers, is feeling fresher than ever. Here’s hoping some whispers of an Australian tour eventuate; I’d love to cop this material live.