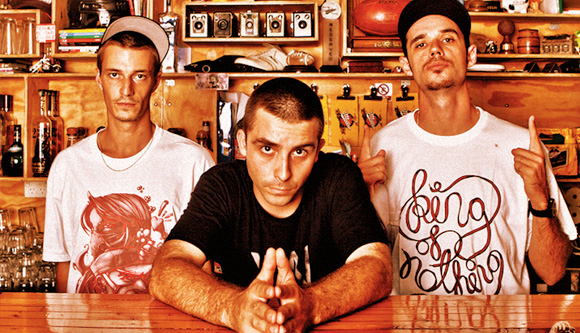 Adrian Eagle was a beautiful opener for this evening. The Melbourne based artist has been selected by Thundamentals for this tour and his raw passion created the right vibe (his velvet shorts were also pretty awesome). There was a steady crowd for his set, as I anticipated the swell over the evening due to it being a sold out gig.

B Wise from Sydney certainly had more a party vibe and had the increasingly building crowd moving around a bit more. Their set did feel a little less ‘live’ though compared to the other artists tonight and the vibe changed to more of a nightclub feel. As their set came to a close I started to wonder where the entire sold out crowd were, as the place was emptier than some other recent gigs I have been to at UC.

This didn’t change by the time Thunda’s hit the stage, but it was great because it meant we had more room for dancing and they definitely encouraged that. Second song in they hit us with ‘Quit Your Job’ closely followed by ‘Noddle Soup’, giving us nice coverage of how terrific they have been over their 10 years. They pulled Adrian Eagle back on stage for ‘Brother’ mid set, and as the song came to a close with a mobile phone light sway from the audience we were reminded of how that Like a Version cover had been a big part of their career. We got all we wanted over the night with ‘Think About It’ and ‘Sally’ being saved up for the second half of their set making sure we stayed pumped and didn’t leave disappointed. Thanks for choosing to celebrate 10 years of your career with the Canberra crew.