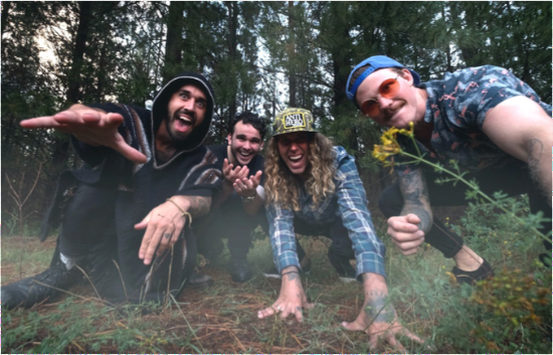 Young Monks are back! After dropping off the radar over the last couple of years, they released Bayside Suicide earlier in 2018. It’s the band’s first single since 2016’s Bad Bad Freddy and kicks off the album cycle; one that continues at Mr Wolf with their first hometown show since Googfest 2016.

The fist-pumping EDM/good vibes of Mr Wolf seems an odd spot for it, right?

“We’ve got a good relationship with the club; we’ve spent a lot of time there drinking and having a good time,” says bass boss Tommy Caldwell. “We’ve played a show there before and they were really accommodating to what we wanted to do with our ideas, including now when we wanted to come back and really kick off the album and single cycle.”

The situating of the gig at an honest-to-goodness nightclub could theoretically hint at the sonic direction of the album, but that isn’t the case.

“Not necessarily,” Tommy says. “There’s more production on the new record, but that’s the natural progression. It’s all self-produced – all the tweaks and spins and samples that Sam has put on the record. It’s a bit more that way but definitely not a completely different direction.”

For a band that built a strong following based off sheer force of will and a series of live shows, it’s a bit weird for them to drop off the radar as they have. Considering they’ve only got five songs online (six, with the recent Supersonic Melodies), it’s almost unheard of a band to maintain it as they have.

In the last year, they instead chose to sink themselves into the recording process, taking time to saunter up and down the south coast to work it all out.

“The first session was down near the Snowy Mountains. It was productive and kicked things off in terms of ideas. We rented a house in Bundanoon for a week, sent all our equipment up there and that’s where it really snowballed quickly.

In was there that all the song ideas came from, and we got a good layout of where the record was going. From there, we took ourselves down to Apollo Bay in Victoria and that’s where we got most of the record done. In this old country house in the forest, near the great ocean road in Apollo Bay, we just knuckled down in there for a week and pretty much nutted out the whole record.”

That nomadic style also channels the beauty of the east coast of Australia, culminating in the album’s title, Swamp Creek. This particular way of recording seems to have left its stamp on the record, which Tommy described as “tropical”.

The album is super, super DIY. This was inspired by a trip up to Sydney to lock in some recording sessions, which didn’t quite go as planned.

“We were talking about going down the studio route and when it was all said and done it just didn’t have that Young Monks flavour that we’ve developed on our own.”

It’s this knowledge of their own appeal, or flavour, that drives the band. As Tommy put it, and he put it better than I could, “Young monks is an experience, that’s how we treat it; going to Apollo Bay, up to Bundanoon and down to the Snowy Mountains, making the whole thing an experience and a process so that at the end of the day when it’s finished the body of work is just special.”

The gig is set to go off. The band’s got huge plans for the bigger space. As Tommy reveals – “They’ve pretty much given us free reign at Mr Wolf with UV paint, bringing in UV lights for production and that. Should be fun!”, adding it’s a, “funner nightspot for people wanting to go out and party, do something a bit different”. If the band bring the energy to the gig that Tommy brought to my chat, it’ll be a banger.