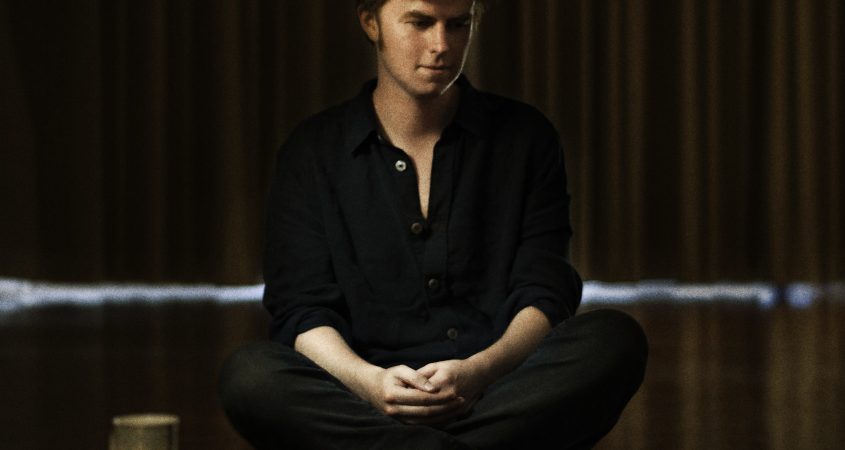 Like many before him, TATE SHERIDAN has wrestled a fixation with perfection. A celebrated piano virtuoso, the concept of acceptance or even delight in flaws wasn’t immediately conceivable.

“As a younger musician, I was really obsessed with like, cleanliness and you know, everything sounding slick. But as I’ve gotten a bit older, I’ve realised that it’s just, that’s not what it’s about at all.

“Angel Man, it’s not like a Steely Dan record, it’s rough around the edges.”

Loosening the grip on years of jazz school harmony, Sheridan’s third EP, Angel Man, is consciously less preoccupied with polish. The result is both deeply personal and emotionally freeing.

“I think there was a point in the studio, maybe a couple of years ago, where I was really stressing to get a good take of something. [People] would say, ‘man, it’s okay, you know, sometimes the mistakes sound better’.

“I started to hear some mistakes in the recordings, and then there was a day where we’d take some out and I’d start to miss them, and it’s just like, well man, I need that back, that’s how it was on the day.”

It makes me feel like I’m walking into a studio in the sixties or seventies and recording a track … for me, that’s just such a thrill

In pursuit of the ineffable, Sheridan looks to Bob Dylan’s later work as a reference point, naming Time Out of Mind, Love and Theft and Modern Times. “They’re rife with mistakes, that’s what makes them totally real and really moving in a way. That’s what I was trying to do with this release, and I think we achieved it.”

Having long expressed an affinity with the iconic storytellers of the late sixties and early seventies, Sheridan elected to record Angel Man entirely on analogue – despite a total lack of experience with the medium.

“All I’d ever done before was, you know, Protools, Protools, Protools. Nothing sounds quite like it, to be honest with you. It’s like a beautiful, old warm sound that you just can’t possibly get trying to use modern technology.”

The description of the session at Queanbeyan’s Infidel Studios conjures up visions of a past time; reels of physical tape spinning and feeding into the machine, and the exposure that comes from forgoing the ease of digital editing. Sheridan recorded the EP with a crew of friends and contemporaries – Brendan Keller-Tuberg on bass, Chris van der Wielen and Sam McNair on guitars and Jamal Salem on drums, with mixing and engineering input from Lou Montgomery (Slow Turismo).

“That’s where I’ve made the best music, when I’m playing with people who know me and who understand some of my life stories.” Sheridan recorded all vocals and piano – as well as whirly and some percussion. “I even played a little drums on there, so that’s a hidden secret, but I have to give all credit to my dear friend Jamal, who just brought all the songs to life, as he always does.”

Though Angel Man was written solely by Sheridan, the experience was deeply influenced by a stint in Nashville, and a confronting foray into co-writing. “I don’t think I’d co-written anything in my life until I landed in Tennessee. I was so worried about it you know, you play something, and what if someone goes, ‘oh I hate that, we’re not doing that’. It’s scary.

“But, you know, that experience certainly helped shape, just from an evolutionary writing point of view, what I could do. People would say, oh, why don’t we try this, why don’t we say it like this, do you really need a pre-chorus here.”

With a deep regard already for the great American songwriters, the experience motivated Sheridan to unearth a minimalism in his own work. “I wanted this EP to be totally different lyrically. Some of the great songs from that time, they’re actually the simplest. That really started to appeal to me. How to say more, with less words, and how to say more with less chords.”

There’s a particular fondness for ‘Starting Again’, the record’s closing track. “It is such a simple song in the nature of harmony and melody, it’s very personal, it’s very intimate.

On the record we used a beautiful old Leslie Cabinet sixties Hammond organ. Like the real deal, the real instrument from the sixties. No electronics at all. [And] a really old, kinda Tom Waits style beat up, upright piano that’s just ever so slightly out of tune.”

‘Starting Again’ has been a highlight of recent live performances, ahead of the EP’s official launch. Sheridan embraces his listeners with openness and humility. “It’s always great to go on stage and try new things, and play new songs. That’s why musicians are so blessed, and so lucky, because you get that response straight away.”

Ultimately for Sheridan, Angel Man is a closer union of his own raw, personal songwriting and the influences that inspire it. “It’s bringing me closer to the music that I love so much, and the stylistics behind it, the practicalities of creating it.”

TATE SHERIDAN returns to Smith’s Alternative with his band for the launch of Angel Man, February 24 from 7:30pm. $10/$15 on the door.

Support Jacqui Douglas on Patreon!
11% complete
When we reach $500 per month we will begin the official BMA Podcast. This will include interviews with some well-known musicians and artists, tips and tricks for publishing in print and online, as well as other discussion topics around Bands, Music and Arts in Canberra!