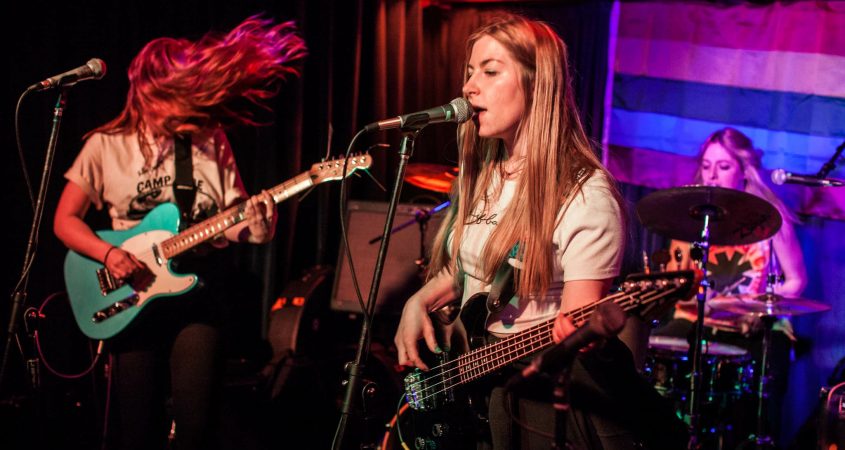 We were really stuck on a name, but it actually came from us sitting in Katherine’s bedroom and we were looking around the room for inspiration, and saw a Nirvana poster she has on her wall. It’s a photo shoot from when they were in London, sitting in front of the Dalmacia Hotel, which has since been torn down.

It’s always a struggle fitting ourselves into a genre, but we’d probably say we play indie/alternative rock.

During our first ever show, we played ‘Everybody’ by the Backstreet Boys and all of our friends in the audience and some of the other bands jumped up on stage and started dancing and singing with us, it was incredible! It became a kind of tradition whenever we play it, they still do it at gigs too!

We’ve shared the stage with some incredible bands including Jeff Rosenstock and The Last Exposure and we’re very proud of everything we’ve achieved in the past year! It’s been a super busy time, but probably our proudest achievement is playing with Wet Lips for our first ever interstate show at Urge Records in Wollongong. We brought a bunch of our mates down too, and it was an awesome gig and so much fun!

At the moment we’re planning on recording and releasing our music to take the next step as a band. It’s super exciting and we can’t wait! As for the future, we really wanna stay together as a band and experience as much as we can for as long as we can.

When one of our friends, Matt, crowdsurfs and jumps up on stage and takes his shirt off during our last song at almost all of our shows. One time, he started crowdsurfing at the Phoenix and no one was really carrying him so he kind of fell upside down before our friends saved him!

Probably when we say “Can’t Stop” instead of “Can’t Stop This” which is the actual title to one of our songs, but we’ve changed that song around like seven times so we always mess up the name. I guess you could say we just can’t stop changing it!

The Canberra scene is thriving at the moment, it’s really great and there’s a real community coming to everyone’s shows; bands supporting other bands shows is so important. The only thing we would change is maybe more venues around Canberra, but the scene is constantly growing and it’s super supportive and great!

We have heaps coming up! On the 13th of October we’re playing the En Plein Air Festival at ANU, the 14th at Lobrow Gallery and Bar, the 18th we’re doing Wodenstock which is a gig and workshop for students at the Woden School, the 21st at the Basement for the Rock For Tara charity show, and the 28th at the Phoenix for a huge Halloween gig with a bunch of our favourite bands! It’s a big month ahead for us!

Triple J Unearthed: https://www.triplejunearthed.com/artist/dalmacia, there will be more uploaded up on it soon so keep an eye out!