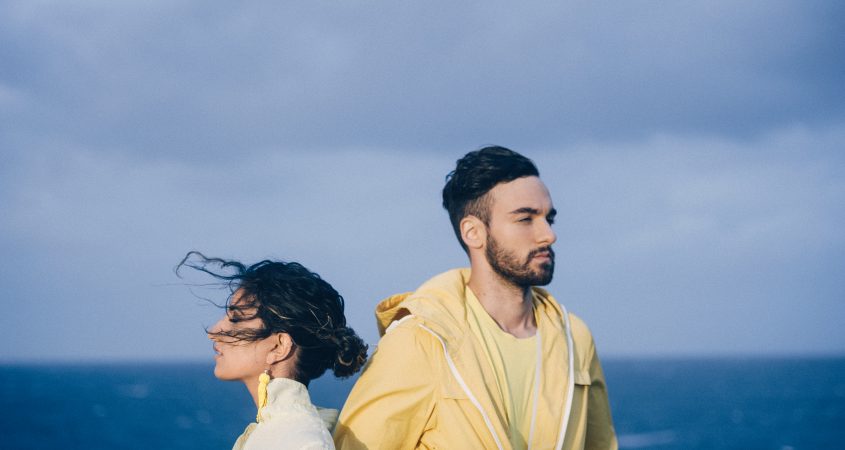 David Ansari, one half of dreamy, acoustronic, international duo VALLIS ALPS, is very apologetic on the phone. His other half, Parissa Tosif, was meant to speak to me, but is sick. “She’s quite good at interviews,” he says, “so hopefully I can live up to her, hopefully I can punch in the same weight class.”

Vallis Alps have been pretty busy since they released their debut EP in 2015 – they’ve gone viral, had two tracks in Triple J’s Hottest 100, and played what seems like every Australian festival in the past two years, as well as a casual world tour. Ansari, the multi-instrumentalist and beatmaker to Tosif’s ethereal vocals, is incredibly modest when talking about how it all happened.

“Well, we just got really lucky early on. When we put out our music the internet kind of found us. We didn’t set things up well for a huge launch of any kind, but it kind of went viral early on.” Now that they’ve established themselves, it’s about remaining relevant. “The challenge once you’re super viral is you have all this attention and everyone’s attention span goes to something else. But for us what we’ve found is that we’ve been really lucky because a lot of people who come to our shows now are people who have found us in the last month. But at the same time we have a really good amount of support from people who have been listening from the beginning.”

Of course, that luck is mixed in with a lot of hard work. Ansari and Tosif are remarkably self-sufficient from a creative standpoint. “We do all the production, all the mixing, all the writing, the recording, the graphic design,” Ansari explains. “So because of that we’re sort of able to get by without a lot of the resources a lot of other bands might need. So far, it’s kind of just been what’s worked for us.”

The independence this grants them (they’re not signed to a label) allows them to put music out whenever they’re ready to. Take ‘Oceans’, which came out in September. Ansari made the beat on a plane back in May, just after the Fables EP came out, and the song came together quickly. “We just ride the wave of creativity and even if it comes in the middle of a tour year, we’ll put it out,” Ansari says. “We didn’t really want to sit on ‘Oceans’ for too long. Because the more you sit on something that’s done, the less excited you are about it and the less likely you are to release it. So we thought, what the heck, it’s done, let’s just put it out.”

The new single signals another conceptual and musical shift for the band, while retaining the essence and magic of their music. “It aligned with the themes we wanted to write to, and one of them was resilience,” Ansari says. “And so ‘Oceans’ kind of became a song about that, and also became its own thing. So it’s sort of in between carrying your weight, but also kind of like a fun pop song. So it’s sort of in between those worlds.”

In between a world tour, two acclaimed EPs and a lot of writing, Vallis Alps have barely had time to breathe. “Really from the beginning of our roots as a band, it’s just been catching up to the momentum that came out of nowhere for us,” Ansari says. The band’s last show for the year is at Spilt Milk in November, and they’ll take some time off from touring in 2018. “So now it’s kind of the first time we can slow down a bit and say great, what do we want to accomplish musically, and who do we want to work with to do that? So now it’s sort of the first time we’ve been able to have those conversations. So hopefully next year we’ll start to explore collaborations more. Because we’ve sort of found our own rhythm as collaborators ourselves, between Parissa and I.”

Ansari is originally from Seattle, while Tosif hails from Canberra; they met in Israel on a gap year, wrote their debut EP together in a month in Seattle, and released it two years later. They’ve both been based in Sydney since 2015, but are due for a shake up. “I’m actually moving to New York in December, so we’ll be apart again,” Ansari reveals. “Even when we’re in the same city, we spend a lot of time on our own working on individual ideas and come together and smash things out from a decision standpoint. So I guess we’ll be working remotely together soon, again.”

In addition, Tosif is taking some time to focus on finishing law school, while Ansari is working on his side project, Crew Cuts, a panel discussion with other musicians.

But first, Spilt Milk. “We’ll be playing a bit of new music for that. I’m just really excited. Festivals generally, when we first started, were the most terrifying thing. But now we kind of have a rhythm of how we perform, and a really good team around us. The energy wave you ride is different than other shows, different than any other experience. It’s just a mass of people. And to experience that in Canberra is really special for us. Canberra’s dope.”