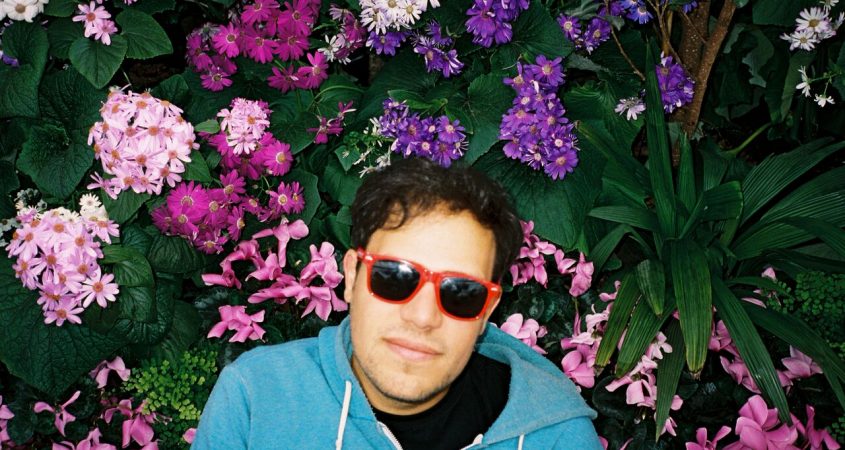 Jeff Rosenstock’s energy, enthusiasm and goodwill are infectious. If I inserted all the times he laughed during our conversation it would be exhausting. He immediately answers the phone with a huge “heeeeeeeyyy, how’s it goin?” It’s this energy and passion that draws people to him and his music and makes his fans extremely dedicated. So much so that I actually invited one local fan to be part of this interview with me.

“I actually haven’t been to Canberra yet to do my solo shit,” says Rosenstock. “The last time we played there there was a review that compared us to Weird Al Yankovic, which is insane but also hilarious. I wonder how its gonna go this time?”

“I try to write back to people. Sometimes it’s a bit too much for me. I’m a pretty anxious guy so I just try to do as good as I can and know that anybody who’s writing to me will, like, get that I’m a fucking weirdo sometimes and I might not write back.”

He is referring to the time Bomb The Music Industry supported the Smith Street Band at Phoenix. “I think Bomb The Music Industry played an improvised cover of ‘Zero’ by the Smashing Pumpkins as if it was done by a screamo band, a bunch of times, like five times during the set and someone didn’t like that who wrote a review so I’m stoked to go back. I really liked that venue, I really like The Phoenix.”

Well Canberra is damn excited to have Rosenstock back. My Facebook feed had a lot of buzz on it the day the show was announced. It was these fan reactions that prompted me to invite local artist Ben The Red to join me for the interview. I have seen Ben perform a few times around town, often adorning a Jeff Rosenstock shirt and playing his song ‘I Wrote to Jeff Rosenstock and he replied.’

As Ben puts it to Rosenstock; “I wrote to you just after We Cool came out and the whole fact that you replied to me was just a massive thing and I really appreciated it, so I ended up writing a song about it.”

“Thanks, that’s nice to hear,” replies Rosenstock. “I sometimes write back thinking I sounded like a dumb idiot.”

So was Ben a lucky fan or is this common practice from our punk hero? “I try to write back to people,” says Rosenstock. “Sometimes it’s a bit too much for me. I’m a pretty anxious guy so I just try to do as good as I can and know that anybody who’s writing to me will, like, get that I’m a fucking weirdo sometimes and I might not write back.

“Sometimes if it seems like someone’s in a crisis I won’t be sure if I’ll have the appropriate response for telling somebody what to do with their life but you know I used to write to bands and shit when I was a kid so I kinda just try and do the same thing. I still feel like I’m being honest and I’m not doing it because I have to.”

Besides his own music Jeff is well known as an inspiration, supporter and producer of many other acts (Smith Street Band, Dan Adriano), and founder of his own label, Quote Unquote Records. It’s this DIY approach that makes him one of modern punk’s champions.

“Growing up a lot of the bands whose music I liked also had that stuff,” he says. “And that was just kind of the person that I felt I was even before I knew anything about music. I think about like school projects and shit and making stuff in elementary school and making stuff on my own without having to have teachers tell me what to do and that kind of thing. Then I found Fugazi and heard about Dischord Records and Asian Man Records and all that stuff and later Against Me and Plan-It-X Records.

“Just all the bands I liked, a lot of them seemed to be either on Independent labels or DIY stuff. So when I started finding out about DIY basement shows and stuff like that I found the thing that I liked and had been looking for. I was from Long Island and we would all put on shows when we were kids at old halls and church spaces, just places that would let high school kids hang out there. Now I don’t know how the fuck they did that.

“Yeah, it’s just always been there for me and I feel it’s inspiring to anybody that wants to do anything, it’s just like ‘yeah you can do it,’ don’t worry about people who tell you you need help or people that tell you need somebody else to do it. It’s alright, if you fuck up it’s ok.”

This passion for music developed at an early age for Rosenstock. “I started playing guitar when I was really young. I think I was five. I’ve always just been weirdly writing songs in my head since I started listening to pop radio or watching MTV and stuff like that and going ‘I want to write a song like Debbie Gibson or Madonna or Bobbi Brown or something.’

“I used to run around the backyard singing made up songs about like Blockbuster Video, which is a video place in America, but in my head it was in the style of like Bobbi Brown. I’ve been writing songs for a very, very long time but I kinda started figuring out how to turn them into actual songs when I was like 12 or 13.

“Everclear, Sparkle and Fade was a big one. I learnt how to play that whole record. Green Day, Dookie was big. Nirvana, In Utero, and a lot of like listening to The Mighty Mighty Bosstones and listening to the way Nate Albert played ska rhythm. There was so much percussion to it. I practiced for so long to figure ways to get more notes in there and play guitar as like a percussive instrument.

“I think that’s something that’s really stayed with my playing now which is because I play with a lot of attack and a lot of tremolo and I think that all comes from playing ska guitar. Even though I don’t like to think about Pantera now, Dimebag Darrell was one of the first guitar players I liked and trying to learn how to play all the solos on Great Southern Trendkill. That was like extra level shit that I was trying to do as a kid, turning the distortion way up and trying to do squeals and shit like that.”

Hearing about Rosenstock’s various influences reminded me of some of the weird and wonderful covers he’s done, so I was hoping I could persuade him into doing something like that for us at the show.

“I don’t know. I don’t really plan. Were usually just goofing around and will be like ‘we all know a Rage Against the Machine song, let’s go.’ I think last time we were in Brisbane we played ‘Monkey Man’ just because the four of us were in a ska band together that covered ‘Monkey Man’ and we got an encore. That was the only encore of the tour so we were like ‘alright you guys want ‘Monkey Man.’’

“Hopefully we’ll do something dumb. If we play like one of our songs as an encore you should call us out and say this is bullshit, do something bad.”