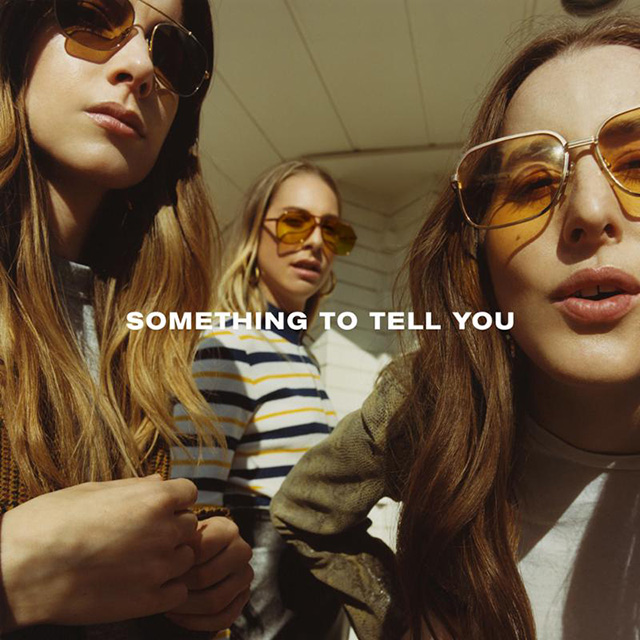 The Haim sisters are creating a future that I want to be a part of.

The three-piece (five-piece when touring with drummer Jody Giachello and keyboardist Tommy King) have returned with a sophomore effort after a three-year gap from their last album Days Are Gone which I think still reigns as their high watermark. Something To Tell You seems to me as if it was written by an ornate quill festooned with a peacock feather and also made of tightly compacted emotional pain and longing that weeps ink of the most stygian black. The recurring themes tend to be the rotting façades of doomed relationships and the forlorn feelings that such a lachrymose demise will ultimately bring with the subsequent fallout.

If you listen closely, you can hear all kinds of random animal and machine sounds interspersed into various tracks on each song. Listen to ‘Want You Back’ a few times and you won’t even need noise-blocking Sennheisers to hear those bastard seagulls guffawing in the background. The funky choreography in the music video also needs to be seen to be believed. The random samples are kind of like what you get if you listen to Dark Side of The Moon, or that solo on Talking Heads’ ‘Born Under Punches’ that sounds like a dial-up tone in a concupiscent frenzy. And this is an eccentricity that, despite looking like it was picked up off a dinner plate and thrown at a wall, sounds like something that belongs. Something that had thought and effort put into it.

If you’ve been recently scorned or something similar, this deviation into emotive songwriting will probably arrest your attention and keep it held firmly in place for the 42-minute duration. It’s a fairly consistent theme throughout. This may come across as overly soppy and schmaltzy to some, especially when compared to what has come before it, but I am content with Something To Tell You as a successor to their previous work.

Support Patrick Ogisi on Patreon!
11% complete
When we reach $500 per month we will begin the official BMA Podcast. This will include interviews with some well-known musicians and artists, tips and tricks for publishing in print and online, as well as other discussion topics around Bands, Music and Arts in Canberra!