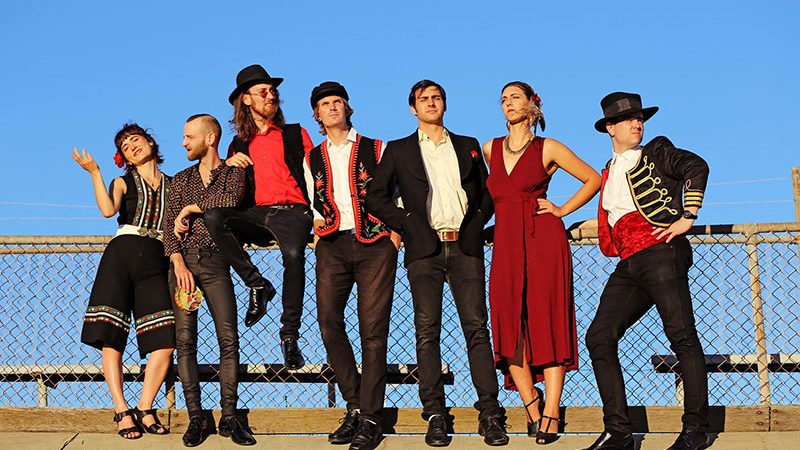 When Josh Gluck of HELLO TUT TUT calls in for our interview, he lets slip that being a touring band in winter can have its perks, namely gigs on the Gold Coast in June. “It’s probably about three times warmer than Melbourne at the moment. It feels like early autumn,” he says, spiking the envy of anybody who’s felt below-zero temperatures in the last month.

Hello Tut Tut have been together less than two years, but they’ve shot forward at an incredible rate. It near boggles the mind, but Gluck has his theories as to why it’s come together so well, so fast. “I think it partly comes down to all of us having been in bands before and having learned from a lot of our mistakes, and now having the chance to come together and play music and do things we love,” Gluck reflects. “I think it’s also to do with the way we’ve been received. There’s been a lot of enthusiasm around a lot of the shows we’ve been performing, so that’s been really wonderful.”

“[Canberra Civic] was a very quiet CBD; we didn’t know where the people actually came from.”

When you see them play, however, it’s easy to see why audiences love them so much. The joyous abandon that takes over the dance floor as they play their modern Eastern European-style originals and traditional covers is infectious, and it all starts with the attitude on stage. “We [just] really love to get people dancing and for people to really enjoy themselves when they see us,” Gluck says.

And when they played The Phoenix earlier this year, at a Monday night Bootlegs no less, they were blown away by how much Canberran audiences reciprocated that feeling. It took them completely by surprise. “Firstly, we hadn’t played in Canberra before. We weren’t sure what kind of reception we were going to get. It was a very quiet CBD; we didn’t know where the people actually came from. But once we stepped into that room, it was so warm and so receptive, and everyone was just so stoked and happy to listen to our music and dance to our music, and it was a packed-out crowd, it was a sell-out show. We just felt such a warm welcome,” Gluck remembers. He says a return was inevitable. “Yeah, it stuck with us, and we’re so stoked to be going back and playing on a Saturday. Also, the connections we made: we met a lot of interesting people … We’re really looking forward to coming back down and hanging out again.”

Just think: if they managed to get the Phoenix heaving on a Monday night debut, this time is going to be nuts.

HELLO TUT TUT perform at The Phoenix on Saturday July 15 from 9pm. Entry is $10 at the door, with support spots from EAST ROW RABBLE and GUYY & THE FOX.

Support Noni Doll on Patreon!
12% complete
When we reach $500 per month we will begin the official BMA Podcast. This will include interviews with some well-known musicians and artists, tips and tricks for publishing in print and online, as well as other discussion topics around Bands, Music and Arts in Canberra!