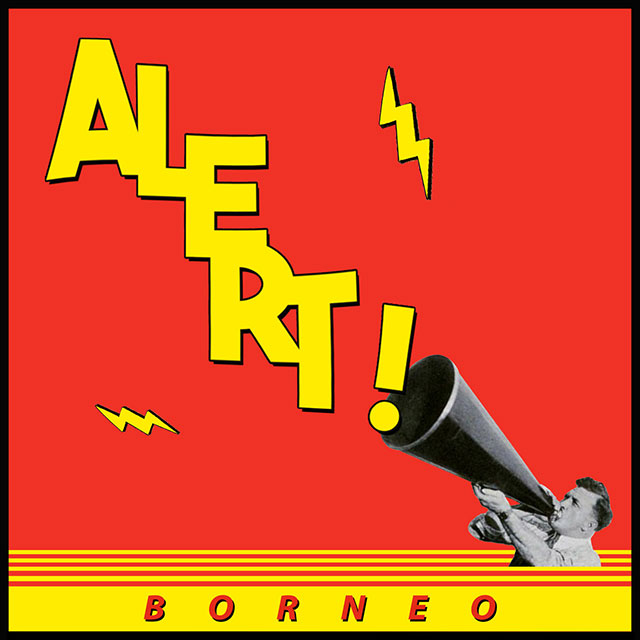 Sydney five-piece Borneo has gone through a series of identity crises, having used and discarded such monikers as Charlie Charles & The Cherry Pickers, The Willy Bums, Milky Sanchez and Tubby John. Self-described in style as discopunk or rainbowrock, the band’s overall vibe is funk and it has now overcome its internal confusion and lunched the debut EP Alert!

Earlier material such as ‘Jesse’ captured Borneo’s wild, arty sense of rhythm with a brash playfulness that gave its songs a special character. Past song themes (e.g. in ‘Eating Animals’) have followed a free flowing path, in keeping with the band’s musical sensibilities. Throughout the band’s evolution, influenced by its lineup changes, the band’s commitment to rhythm has triumphed over all.

In the new EP, the super hyper ‘Hold Me in the River’ opens with a yell. Its party band feeling is promoted by frantic guitars, antique keyboard highlights and an alien wailing in the bridge. Very wordy, the quirky lyrics gush forth, leading to a singalong chorus. The funky ‘Boyfriend’ looks at family relationships from a new angle, as mum’s love interest is told he is unwelcome with “Don’t touch my mum in my house!” It struts along with pumped-up guitar hooks, inter-weaved tunes and a power chorus. The title track launches with a prolonged buzz, and features fuzzy echoing backing vocals, a strong bass chassis and held keyboard chord dress-ups. It demands “Are you the spaghetti or are you the can?” in the manner of Talking Heads’ ‘Once in a Lifetime’. The eccentric ‘Holidays’ examines seaside vacations with a semi-narrative vocal approach. Pimped with a strong synth warble and an eerie electro whine, its chant of “Holidays, holidays!” beckons sun worshippers onwards.