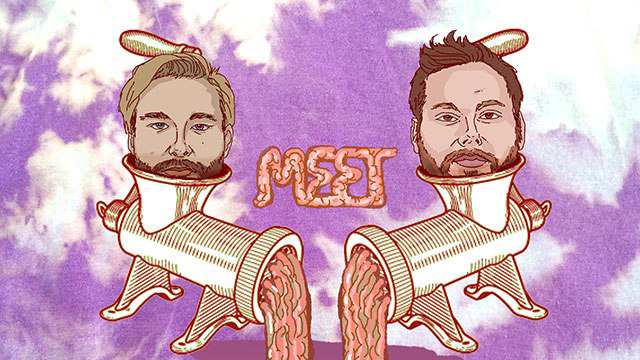 Our sound is built by tangling guitar riffs and atmospheric loops over hip-hop beats, synths and choral vocals. It’s part pop, part not.

The verb ‘teem’ means to be full of or swarming with, and reflects how we think about music.

Our influences for this project are any band that writes harmonised guitar lines – Queen, Television, The Strokes, Ratatat – and hip-hop artists like Jonwayne, Earl Sweatshirt and Brock Berrigan.

Playing a TEEM live show is like tap dancing on a knife. Between the two of us we run six-channels of guitars loops, Ableton Push, synths and we sing.

Our last gig was at Transit with Borneo. We got through our set with minimal stuff ups and didn’t embarrass ourselves. We were stoked.

Releasing our debut single, ‘Kronk’. It’s a great feeling to pull a song out of your head and into the world.

We’re finishing off our album, organising a tour and making an animated video for ‘Kronk’ with Canberra artist, Mei Wilkinson, which we’re really excited about.

The temperature. A few more venues.

Smiths Alternative on Sunday July 9. It’s the day after Bones’ birthday, so could be the sloppiest set yet.