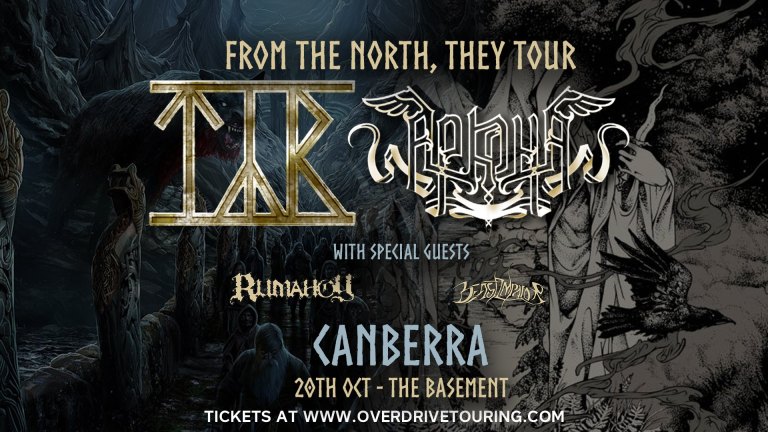 From the north they come… for the very first time in Australia! Faroese Viking lords Tyr will bring the bite of winter’s frost to our shores in October 2021, and they will be accompanied their Russian compatriots Arkona for this massive Folk Metal double bill!

Named auspiciously after the Norse god of war, Tyr have been bringing the almighty word of Asgard to audiences for two decades. Now they’ll set sail on their longest journey yet, with the songs of their latest album ‘Hel’ behind them! And not only will Australian fans be treated to Heri Joensen’s deadly vocal and guitar combo, alongside fellow founding member bassist Gunnar H. Thomsen, but they will be joined by new guitarist Attila Voros (ex-Nevermore, Satyricon live). The line-up is completed by the thunderous skin-bashing of drummer Tadeusz Rieckmann, completing the unbeatable quartet.

Not to be outdone, Arkona provide a truly unique experience with Masha Scream’s harsh vocals accompanied by traditional Russian wind instruments complementing their Folk Metal sound. Originally formed by two members of the Dolgoprudny Slavic Neopaganism Society, including Arkona founding member Masha, the band have been forged through trials to deliver eight studio albums including their latest offering, 2018’s ‘Khram.’ The album, with its name translating to ‘Temple,’ is an adventurous exploration of the worship of nature.

Rarely does such a powerful double bill make it to Australia, let alone in the hallowed genre of Folk Metal. This tour will be one for the ages, and hits five cities for good measure! And for those wanting to go the extra mile just as the Vikings are, VIP meet and greet packages will be available!