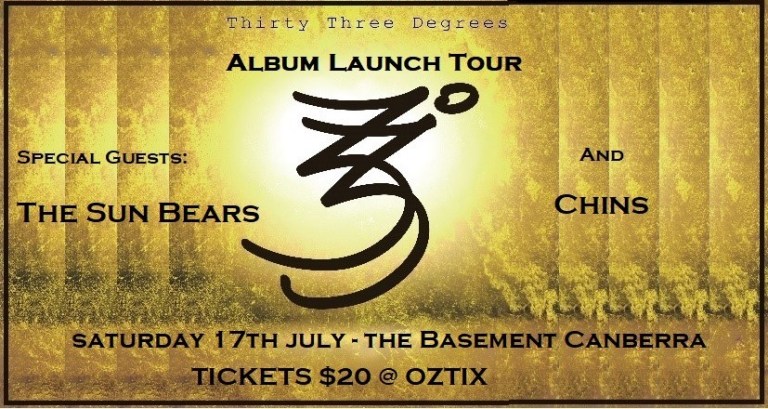 The Thirty Three Degrees album launch tour keeps on truckin’ and here we are in Canberra @ The Basement on Saturday 17th July and this time The Sun Bears and Chins are joining in to make a awesome night of music.

Hailing from the NSW Central Coast Thirty Three Degrees are an original rock band with a strong groove and some rootsy vibes.
After a slow start, due to COVID, Thirty Three Degrees headed into the studio in mid 2020 to record their debut album and soon were picked up by Foghorn records for a distribution deal with the first two singles coming out in Feb and Apr 2021 and now the album is due to be released on 11th June 2021.

Thirty Three Degrees are continuing to pump out great new original material while also rehearsing for upcoming gigs including Wollombi Music Festival in Nov . Having already started to make a mark in the Sydney live music scene, Thirty Three Degrees are hitting the road for their album launch and getting as many people as possible to hear what they have got.

Throwing everything they have into each note The Sun Bears are a fully immersive, energetic and original contemporary blues trio with the sort of show you have to see, to believe!

Delivering a dynamic show, Chins’ diverse set lists range from Light Indie Rock through to Hard Core Punk – with a twist of grunge.
Interspersed with covers from bands like “The Cure” and “Skeggs”, Chins have an array of originals – their energetic stage presence has resulted in the Chins’ shows being described by The Basement as “contagious!”