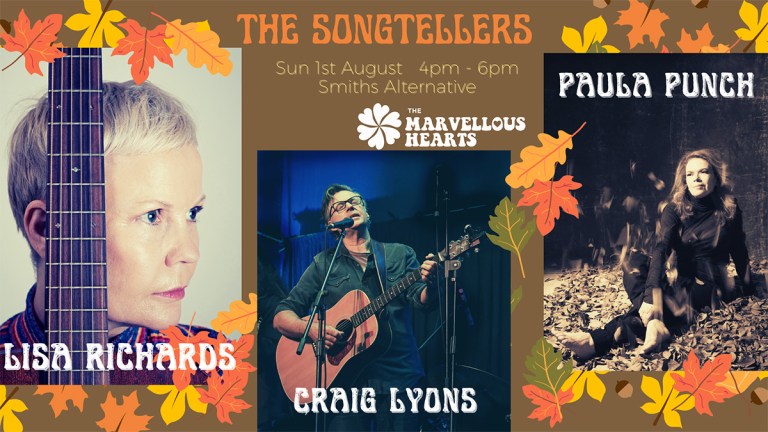 3 unique songwriters and one all star band joining forces for a show that revels in the power of the song.

“Songs have the power to transport, to transform, to illuminate, taking the audience on a journey that spans time and space

Lisa Richards : ”Richards is a simple yet powerful songwriter who has beautifully encapsulated the intricacies of the human condition.” Emily Ritchie The Australian

Paula Punch : “the latest reason for fans of the singer-songwriter genre to sit up and take note” S. McCauley http://www.musictalkers.com

Craig Lyons and the Marvellous Hearts: “This is like a sonic time machine that can take you way back to a simpler time, filled with awe and wonder” – Nkechi Anele Triple J

When Craig Lyons of Sydney duo the Blues Preachers embarked on his new project it was a case of following his heart. The seasoned musician, who has performed at festivals all over Australia, including Byron Bay Bluesfest, the Woodford Folk Festival, the Blue Mountains Music Festival and the Gympie Muster, wrote a bunch of songs that felt like they needed a new home and so the Marvellous Hearts were born.

If the Blues Preachers evoked classic blues of the 1930s and ’40s, then the Marvellous Hearts take their starting point from the ’60s and ’70s. They’ve been compared to the Beatles and Bob Dylan by none other than music icon Stuart Coupe, with their tracks being spun on 2ser. They’ve also had comparisons drawn to Tom Petty and the Black Sorrows and been played across the country on Double J, and Triple J as well as community radio and the ABC.

Similarly, Lisa Richards has been carving out her own musical corner of the world for a while, blurring the boundaries of folk, jazz and blues in her songwriting. She returned to Australia after many years living and making music in the USA. Her songs have appeared on compilations, sharing the track list with heavyweights including Adele, Nina Simone and Corinne Bailey Rae. She’s performed at The Telluride Bluegrass Festival, Rocky Mountain Folks Festival, Merlefest, SXSW and CMJ. Her latest album “I Got A Story” was released in the year of Covid-19, late 2020.

When Craig was introduced to the songs of Lisa Richards through a mutual friend, he began plotting a double bill that would feature both artists and one band. Thus, the Songtellers Sessions were born. It makes perfect sense.

“The world is a cornucopia of stories, all waiting to be told. The personal, the universal, the visible and the invisible. That’s what humans have always done, collected and told stories”.