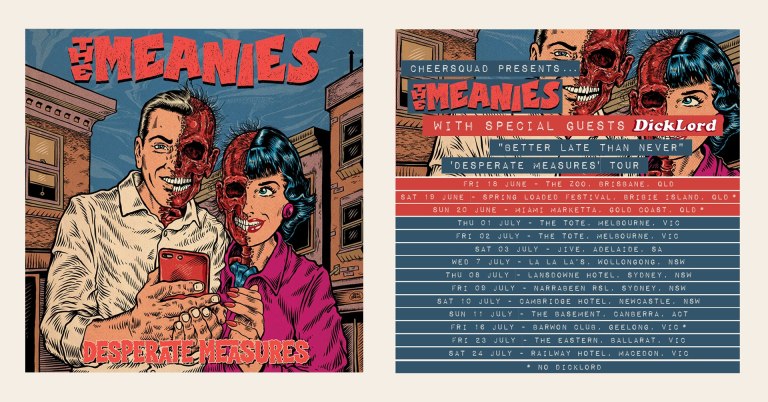 Better late than never! It’s been a year since our latest album Desperate Measures came out, and finally we are going on the road this June/July to give it to you live. We’ll be coming to QLD, NSW, SA, ACT and VIC, and we’re taking the mighty DickLord on the road with us.

The tour is a belated celebration of our ‘new’ album Desperate Measures, which is out now on Cheersquad Records and Tapes.
“Desperate Measures is a hard, fast and catchy onslaught of hard-hitting Meanies mayhem. It evokes the classic sound that made the band a household name in all the worst houses back in the ’90s, and which has influenced generation after generation of young punks ever since.”

Joining us are a group of rowdies, the mighty DickLord, whose album ‘It’s Soooo Boring’ is out now on Valve.

Monster Children have said of DickLord: “With songs about periods, shitty landlords and being fingered weird, there’s something in DickLord’s lyrics we can all relate to. Mix that in with splashes of Bad Brains and Black Flag references and you’ve got yourself a seriously good band.”