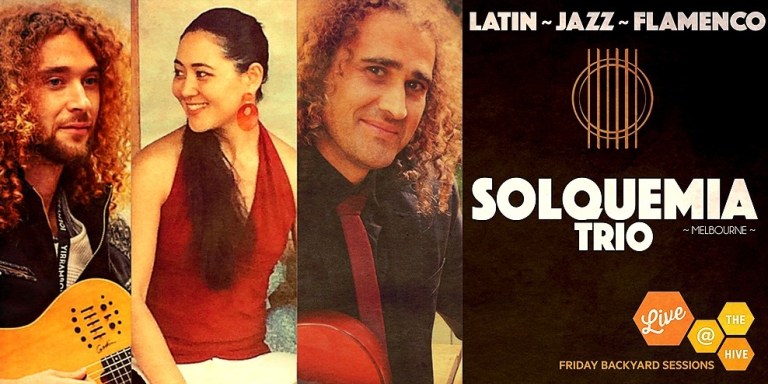 Alejandro Florez from Solquemia welcomes back Aya Kitaoji from SENES Flamenco on percussion and vocals and introduces the young and talented Luke Koszański on guitar.

No strangers to Canberra audiences, the trio will be presenting new Spanish guitar compositions and arrangements along with traditional favorites, Flamenco, Latin + Jazz come together once again for an exciting evening of groove, melody and song.

Food + Drinks Available on the night

Alejandro Florez began playing at 17, and having played extensively around Australia and overseas with the Santos Guitar Trio, established Solquemia in 2009 as a means of presenting his original music to the public.

Alejandro’s debut album, SOLQUEMIA, was independently released in 2010. It consists of his original compositions with influences from the music of both Spain and Latin America. His second album, LIMONERA, was launched in 2012 as the result of his multicultural collaboration with local artists.

As of late, Alejandro has focused his efforts on his home town of Melbourne, returning to his inspiration to first pick up the guitar; Flamenco. After travels to Spain again, he currently performs locally and regularly with Luke Koszański in the Solquemia guitar duo and as guitarist for Senes Flamenco dance ensemble. He has collaborated with guitarist Sergio Ercole at Paris Cat Jazz club and regional wineries. Alejandro is an in-demand flamenco guitar teacher and frequently sought after as a sessional recording artist.

Luke Koszański’s music is shaped by his father’s blues and rock music, and the diverse international artists he has played with such as Ali Birra, Mahmoud Ahmed, Nhatty man (Ethiopia) Yusupha Ngum (Gambia) The Black Sistaz (West Papua) Purbayan Chatterjee and Sheldon d’Silva (India). Luke was also a member of The Senegambian Jazz band, whose debut album won Best Global Act for The Age Music Awards. Luke’s sensitivity to the intricate nature of world music has made him a highly sought after musician across many genres. Recently he has collaborated with Solquemia and Senes Flamenco and has been an integral part of the new compositions presenting today.

Over the past decade, Melbourne-based flamenco percussionist and versatile singer Aya has contributed to the growth of the Australian flamenco community with lead guitarist Alejandro Florez of Solquemia performing in major multicultural events and national arts festivals in the country.

As one of very few female singer-percussionists in the world, her exotic singing repertoire brings to audiences an opportunity to share her love of not only Flamenco as well as Latin/Cuban and Bossa Nova songs.