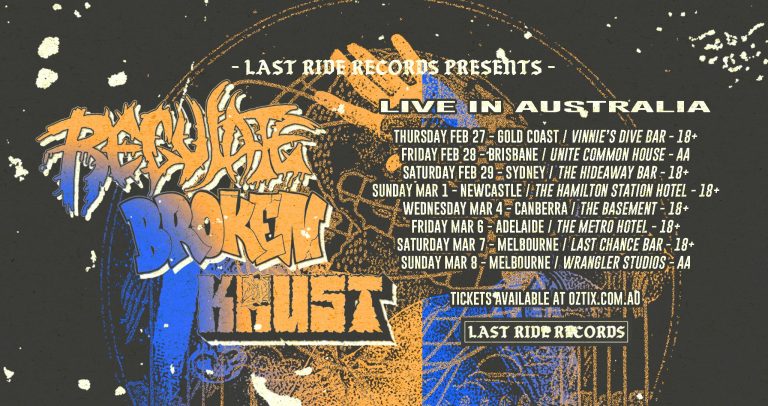 Regulate are a hardcore band from Long Island, New York. After stops in Japan and South East Asia, the band will be touring Australia for the first time in February/March 2020, and will be joined on all shows by Broken and Krust.

Regulate is a band that stands in defiance with their every move. Their latest LP In Promise of Another Tomorrow shows their dedication to the convention of their NYHC predecessors, all while making their sound original and distinctly their own. Each time they take the stage it is not merely a performance, but an event to be remembered. Be it United Blood, This is Hardcore or any festival or venue across the world, the straight edge titans that are Regulate refuse to be ignored or disregarded.

Joining them on the tour will be Melbourne’s Broken and fellow Americans Krust. Broken ended 2019 in a big way, touring the country with Backtrack and releasing their debut LP World Keeps Turning through Last Ride Records. Constantly and proudly flying the flag for Melbourne hardcore, the band will be looking to push things even further in 2020, starting with these run of shows.

Rounding out the package is Krust, who self-released their debut LP Sex Noises earlier this year. A glimpse into the life of lunatics, floating in the ocean with sand in their teeth. People who are united against boredom and being quiet, people who can’t calm down even if they could, and if they could they wouldn’t because like I said they can’t. This is Krust.