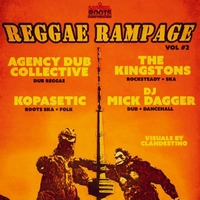 A Mash up of LIVE REGGAE STYE to help get the silly season skanking! Big ups! VOL 2 of REGGAE RAMPAGE – where the live band meets vinyl DJing in a dance for all fans of Roots music and it’s incarnations.

Canberra’s freshest new reggae-folk act Kopasetic finally meet Canberra’s most seasoned Rocksteady groovers The Kingstons in an underground pool hall. Dub pioneers Agency Dub Collective will be there to blur the lines and add colour outside the speaker box while DYP aka Mick Dagger keeps the vibes heavy and Cultura Clandestino bring the eye-candy

Noticing that there was a total lack of Rocksteady and 60s Ska Bands around in 2012 Brett and Elrond decided to join up with Liam and Dan to start the Kingstons. They played a few gigs and functions at places like the Phoenix. Then when the Drummer moved away Brett and Elrond put the Kingstons to rest for awhile. Late 2013 Brett and Elrond coaxed local Ska legends the Lind Brothers and Rohan “Rudy” Dadswell out of their music retirement to form the ultimate lineup of the Kingstons. The Kingstons can now boast that it has former members of F-Troop,the Untouchables, Hell yes,the JuJu Men, Velvet Jones, the Dreamlanders and Charlie’s Children. With such a fine musical pedigree and extensive knowledge of classic Jamaican Rocksteady, the Kingstons put an energetic, Ozzie take on this treasured and influential genre, whilst adding to the repertoire with some great originals. Their debut Long Player is slated for release in 2020.

Kopasetic are a roots, folk and reggae outfit from Canberra, Australia. The three (but soon to be four) piece draw from a diverse range of musical influences and are known in Canberra for the musicianship behind their originals, contemporary covers and instrumentals. Kopasetic’s original music is riddled with soundscapes from around the world and has created a “deep, heavy dialect of folk music” not commonly heard in Canberra, let alone Australia. The music is characterised by the presence of thought-provoking lyrics, deft fingerstyle guitar, lead bass work and a worldly drum presence. For an acoustic band, Kopasetic’s sound is a powerhouse, and they never cease to surprise audiences with the depth of emotion each member can pull from their instrument.

Formed in 2018, Kopasetic have made their mark on Canberra’s music scene, having featured at a series of sold-out shows at some of Canberra’s prime venues like Smith’s Alternative, the Phoenix and the Polish Club. Kopasetic were one of two bands on the final bill of the historic Phoenix Pub. The lads have keen eyes on moving forward with the future in Canberra and Australia. They launched their debut EP on August 2nd to a sold out audience and have an itch to become known in Australia’s folk and roots festival scene

Agency Dub Collective began playing live dub in Australia at the turn of the millennium. Their music is steeped in classic dubwise sounds and heavyweight rhythms, awash with spacious atmospherics. From roots-vibe dup-hop to desert-surf instrumentals, their music is, above all, great to dance to.

Forging their own path with a DIY ethos, Agency Dub Collective have provided an original voice on the Australian live music scene for nearly two decades, paving the way for a new distinctly Australian style of live dub, echoing the landscape of the island continent from the central desert to the rugged coastline.