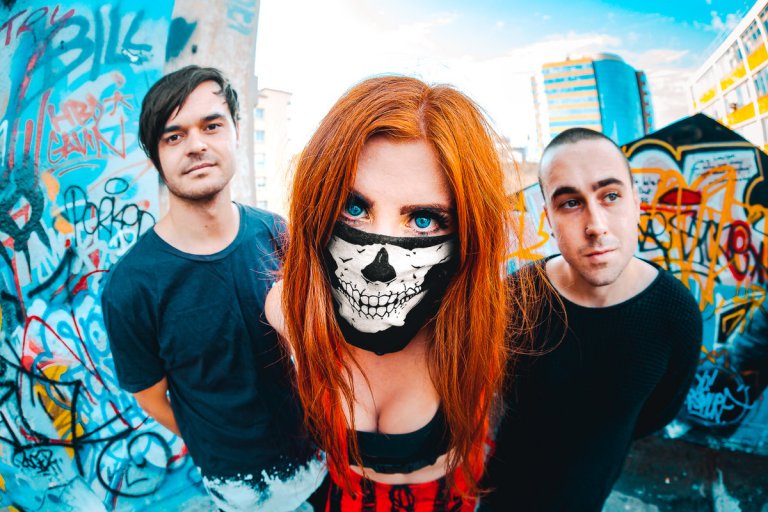 Sydney heavy mutants RedHook have just announced that they will be playing 3 shows in Canberra, Newcastle & Wollongong in February 2021 to celebrate their newest single CURE 4 PSYCHO!

RedHook officially spawned in 2018 with the arrival of their debut singles ‘Minute On Fire’ and ‘Turn Up The Stereotype’, which clocked up over 2 million streams across YouTube (largely through fan-generated content) and garnered rave media reviews, including two coveted 5 star triple j Unearthed reviews from ‘Good Nights’ presenter Bridget Hustwaite and ‘Short.fast.loud’ host Josh Merriel. The strength of these first two releases was also enough to attract the attention of the promoter of one of the biggest rock & metal festivals on earth, Sean Ryman of Download UK, who swiftly booked RedHook to play the 2019 instalment of the festival.

Featuring the core songwriting duo of Emmy Mack and Craig Wilkinson, two strangers from opposite ends of regional NSW whose paths collided after moving to Sydney in 2017 and bonding over the role that music has played in both of their lives, RedHook combine with the young gun drummer Alex Powys to create experimental, heartfelt and attitude-filled alternative music that fuses multiple genres including rock, rap, metalcore and electronica, with lyrics that aim to inspire listeners to keep fighting against the forces of darkness – both in the real world and inside their own heads.

2019 saw the trio release three more singles – ‘Paralysed’, ‘Only Bones’ and most recently ‘Fake’ – all of which have been added to full rotation on triple J and exploded on Spotify with over one million combined streams and multiple editorial playlist adds (New Music Friday, New Core, Heavy Queens, Rock Out & more). These releases also propelled RedHook to be named triple j Unearthed Feature Artist, as well as the UK’s Kerrang! Radio Feature Artist, and go on to win the triple J Unearthed competition to open Download Festival’s inaugural Sydney event in March.

The RedHook whirlwind continued across 2019, seeing the band sign on with the Hen House Management (worldwide) and ink booking deals with New World Artists (AUS) and Paradigm (UK/EU), while in the live arena they played the debut instalments of Sydney’s two brand new rock festivals (Good Things and Download), completed their debut international tour (supporting metal titans Three Days Grace across the UK & Europe), made their Download UK festival debut, launched their own gender diversity-inspired alternative festival in Sydney – ‘UsFest’, showcased at BIGSOUND 2019 and undertook four complete Australian tours (supporting the likes of Hands Like Houses, The Faim and US rock legends Sevendust before selling out the Melbourne and Sydney legs of their own debut headline tour in September).

RedHook were the ninth most-played artist on Triple J Unearthed in 2019, and 2020 is shaping up to be huge for the band, kicking off with a bucket list gig hosting ABC’s rage, with plenty of new music and some “monstrous live shows on the way.