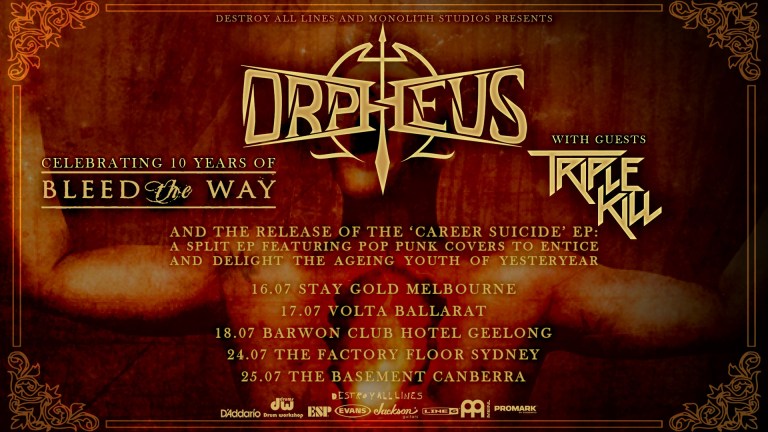 With their aggressive approach to classic melodic death metal, Melbourne’s ORPHEUS OMEGA blends catchy hooks and melodies with crushing riffs seamlessly bringing them into a sound of their own. For the 10th anniversary celebration of their debut album Bleed The Way, Orpheus Omega announce a special tour to commemorate their roots and the exciting return of live performance domination!

Touring rigorously both nationally and abroad since the release of their debut album, the band has never failed to impress with their brand of melody and surgical riffs and have shared the stage with some of the heavy weights of modern metal including Trivium, Children Of Bodom, Dark Tanquillity, Amon Amarth, Soilwork, At The Gates, Insomnium and more.

Joining the celebrations are Melbourne’s melodic thrashers, TRIPLE KILL, who recently released their new single ‘Finish The Fight’ in tribute to popular science fiction video game series, Halo. The single itself was honoured with a sold out show and in their relatively short existence, Triple Kill have notched up a slew of national and international supports. With tongue firmly in cheek, Triple Kill will bring their party A game, guaranteeing sounds of revelry issued into every and every show.