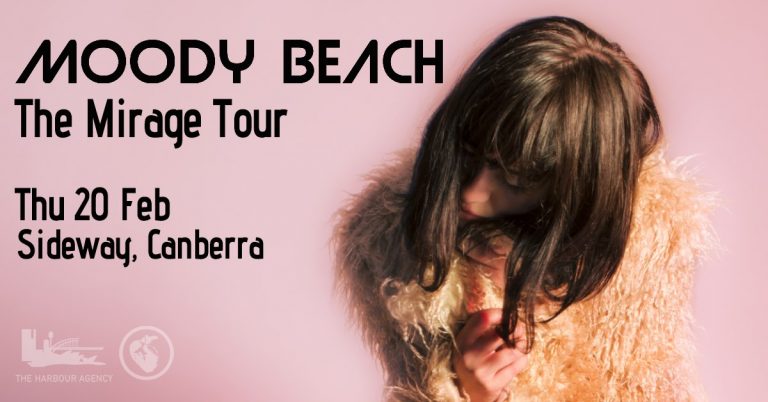 Moody Beach is the artistic project of Sydney songwriter Melissah Marie. Her art is about ‘connection’ and through music & performance she tries to serve up some of life’s honesty and complexities.

If you’ve ever seen Moody Beach perform, you’ll see how she owns her space on stage. “A woman’s body is still a controversial subject,” Marie remarks, “it’s something I consciously tackle through my music, alongside how I behave and what I wear.” Sometimes that’s confronting for people. Marie has been told that it “distracts from [her] music…” a particularly disappointing critique in the middle of the Me Too era. “Mate, I am my music!” Marie responds “I get to decide what that looks like.” It’s a central part of who she is and through her music she hopes to make a little space for others whom feel the same.

October 4 sees Moody Beach release her highly anticipated sophomore EP Mirage. Produced by Australian Dean Tuza (Stella Donnelly, The Rubens, Thelma Plum) Mirage features multiple singles as described by Marie: “When it comes to music, I’m not scared to experiment with genres. Mirage, is a collection of all my favourite sounds. Pop to shoegaze, flamenco to dark-wave – all fitting together in a sonic loop.”

Support from Eleanor Ailie.
———————————–
My father brought home my first microphone when I was a child and my brother and I would put on shows for anyone who would watch. My mother’s a teacher and my father, despite his struggles, loves us very much. I have early memories of Mum sitting by the piano and listening to Dad play, as well as me standing on Dad’s feet while we’d dance to Louis Armstrong and Annie Lennox. Moving from Sydney to Canberra before high school, I call Canberra home.

I feel/express music so much in my body and was given opportunities for this in dance communities and classes growing up. I started writing songs around the same time, sometimes at the piano, sometimes not. Other women, femininity and nature empower me.