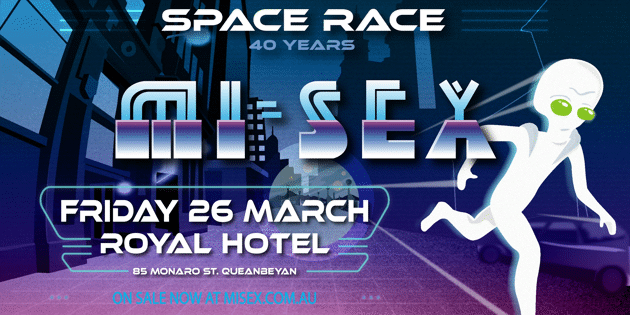 IT’S A PARTY THAT’S BIGGER THAN BEN-HUR AND THIS ONE’S HERE TO STAY!

Party like it’s 1980 when Mi-Sex brings its massive live show and unique blend of rock meets new wave, meets punk meets discotheque, to the Royal Hotel Queanbeyan on Friday the 26th of March 2021.

In memory of our dear spiritual leader and founding member, Don Martin, Mi-Sex returns to the stage in 2021 to celebrate the 40 years of the group’s timeless classic LP, Space Race. Well, we may be a year late but who’s counting this year?

1969 was the year that man first set foot on the Moon, but 1980 was the year that Mi-Sex launched Space Race. This makes 2020/21 the 40th Anniversary of the record that features the hit singles ‘People’, ‘It Only Hurts When I’m Laughing’, ‘Living In September’ and, the LP’s famous title track, ‘Space Race’.

In a set that includes all the hits from Mi-Sex’ debut LP, Graffiti Crimes, Space Race (1980), Shanghaied! (1981) and Where Do They Go? (1983), Mi-Sex promise to consecrate the soundtrack of a generation – ‘But You Don’t Care’, ‘Computer Games’, ‘People’, ‘Blue Day’ and ‘Castaway’, alongside a few newbies, just for laughs.

Tickets are available by clicking here.

COVID-safe social distancing and capacity restrictions apply. To avoid further confusion in perplexing times, if these rules are relaxed anytime soon then there’s every chance that both shows will be merged into one.