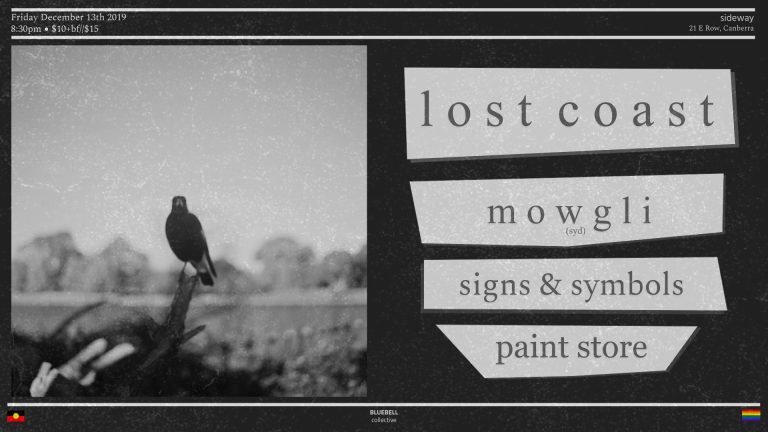 Lost Coast
linktr.ee/lostcoast
lost coast headline show with special friends. last show almost sold out so we’re doing pre-sales for this one!
Lost Coast are a five-piece Post-Rock band from Canberra, Australia. Exploring the intersection between melody, riff, harmony and dynamics the band creates music that changes from sweet melody to wall-of-noise in an instant. Taking influence from bands such as MONO and This Will Destroy You, Lost Coast adds to the genre by fusing elements taken from all forms of modern guitar-rock.

mowgli
http://wearemowgli.bandcamp.com/
Mowgli are four friends playing hardcore/punk/post-rock music from Sydney, Australia. With influences including (but are not limited to): this will destroy you, raein and american football, Mowgli bring a heartfelt and sentimental sound to their audiences. Mowgli toured with Pianos Become the Teeth in February and recently played a sold out show with We Lost The Sea in August.

Signs & Symbols
https://signsandsymbols.bandcamp.com/
Canberra’s very own rock and/or roll heart throbs have captivated audiences not only with their outstanding good looks but also their musical energy and sound. S&S recently played a sold out show with Hands Like Houses in October.

Paint Store
New(ish) local band making some sweet waves across the Canberra (and wider) scene. Great music and even better outfits and people.

We acknowledge the Traditional Owners of the land and country, and recognise their continuing connection to land, waters and culture. We pay our respects to their Elders, past, present and emerging. Always was, always will be Aboriginal land.