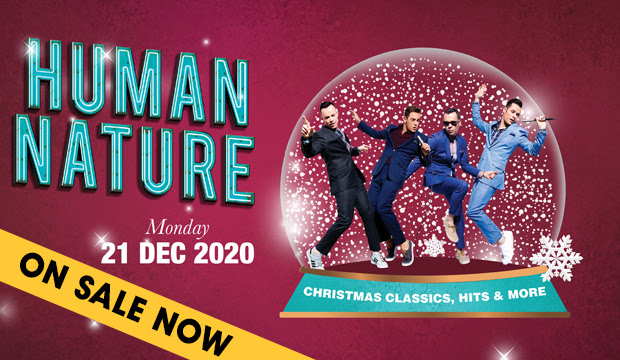 Singing all the Christmas and holiday classics from their chart topping Christmas album (which has rocketed back to the Top 10 every Christmas since its release) this fantastic foursome will have you singing Let It Snow, White Christmas, O Holy Night, Rudolph The Red-Nosed Reindeer and more. Tickets are selling fast so book now to spend your holiday season with Human Nature.

Nothing says Christmas like the soulful harmonies and effortless charm these guys exude, so spend your holiday season with Human Nature.

Since signing to Sony Music Australia over two decades ago, this incredible band have earned their place as one of the world’s finest pop-vocal groups of the modern era. In their illustrious 30-year music career, Human Nature have released 13 studio albums, four of which went to number one in Australia, garnering 26 platinum awards, 15 top 20 singles and five top 10 hits worldwide, with album sales in excess of 2.5 million in Australia alone.

2019 was an enormous year for Human Nature, with their induction into the ARIA Hall Of Fame. They also celebrated 30-years as a band, reached a milestone 2,000 shows as Las Vegas residency headliners and were awarded one of the top honours in Australia, the Medal of the Order of Australia (OAM) for their service to the performing arts and entertainment field.