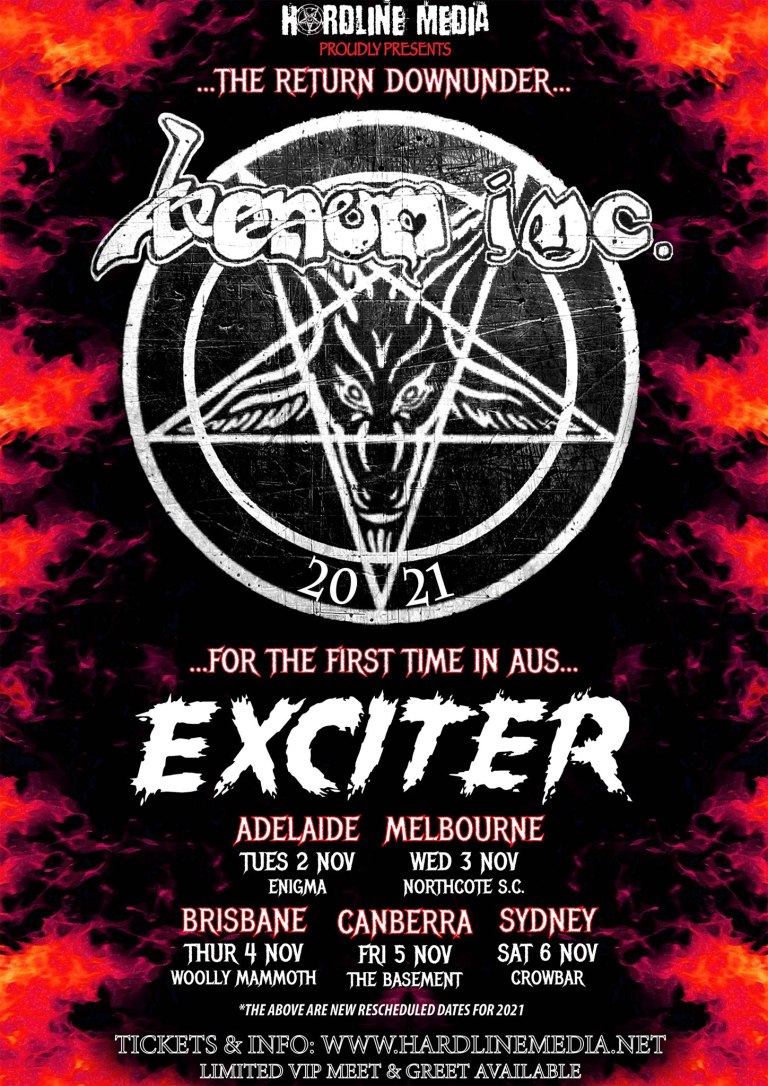 After a testing yet triumphant 2019, Hardline are pleased to announce the return of VENOM INC in 2021, and welcome, for their first time in Australia – EXCITER!!!

Having left Australia wanting more the last time they were here, VENOM INC are set to pack it out down under yet again.

Formed as Venom in 1979 in Newcastle upon Tyne, England. And coming to prominence towards the end of the New Wave of British heavy metal, Venom’s first two albums ‘Welcome to Hell’ (1981) and ‘Black Metal’ (1982)—are considered a major influence on thrash metal and extreme metal in general.

Venom’s second album proved influential enough that its title was used as the name of an extreme Metal sub-genre: Black Metal.
During the 80’s, Venom were THE extreme band, releasing more classic albums such as ‘At War With Satan’ (1984), ‘Possessed’ (1985) and countless classic, live albums, such as the ‘Assault Live’ album series and the legendary ‘Eine Kleine Nachtmusik’ (1986) Double LP and the ‘The Seventh Date of Hell: Live At Hammersmith Odeon’ Video which helped launch Metallica, who were the support band for Venom’s tour.

Hardline are looking forward to welcoming Venom Inc back after their highly successful Avé Australis Tour in 2018, and the infamously killer, one-off Venom Inc Frankie’s appearance, in December 2019. Don’t miss out on the band, full throttle, in 2021!

FOR THEIR FIRST TIME IN AUSTRALIA – EXCITER ARE HEADING DOWN UNDER!!!

Exciter are coming! Hailing from Ottawa Canada, and formed in 1978, Australia finally gets a dose of Speed/Thrash Metal demons Exciter!

Named after the Judas Priest song, Exciter are considered to be one of the originals of the Speed and Thrash Metal genres. In 1983 they released their first album, ‘Heavy Metal Maniac’, on Shrapnel Records. Later that year, they signed a deal with Jon Zazula’s Megaforce Records, which led to the 1984 release of their second album ‘Violence and Force’. This material was toured on bills opening for Anthrax and Mercyful Fate. History would bring many more revered releases by the band, such as ‘Long Live the Loud’ (1985), and ‘Unveiling the Wicked’ (1986), to name just a couple.

It is with much anticipation, that we finally welcome Exciter to Aussie shores!

Don’t miss your chance to witness this epic double bill live in November, 2021!!!