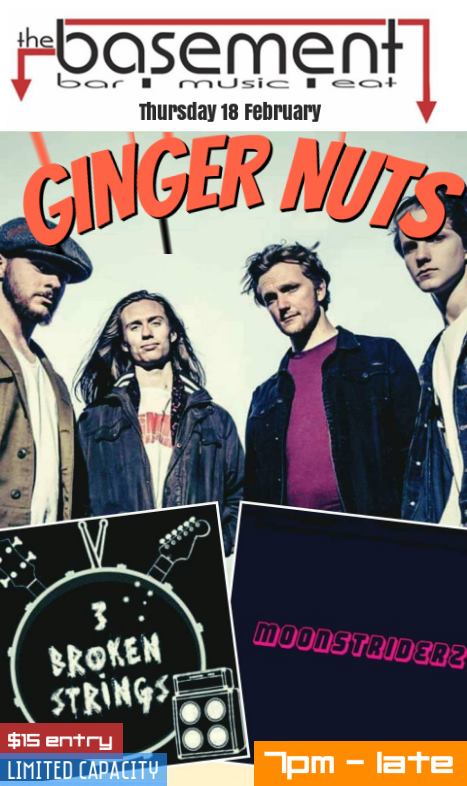 Ginger Nuts are an original Rock band from Canberra, Australia. Featuring Patrick Galen-Mules on guitar/vocals, Nick Dennis on lead guitar, Ed Berry on drums and Corbin O’Brien on bass, Ginger nuts is bringing guitar music back with attitude & style. Ginger Nuts provide an energetic stage performance backed by heavy guitar tones. The band has played many shows over the past years and has developed a solid presence with their original music.

3 Broken Strings are moving ground quickly for a young band and have made a name for themselves performing shows throughout southern NSW and parts of the ACT. The band currently consists of two steady members & manages to convey the sense that they’ve been on the scene for a while, with mature talent and a commanding stage presence years above their age.

Moonstriders is a hard rock band influenced by the likes of Queens of the Stone Age & The Vines. Featuring Patrick McKinney on drums, Daniel Morilas on bass and Jack Kelly on guitar/vocals, the band has already developed their own style and original music. The lead singer being a drummer converted guitarist has developed a unique style of songwriting that focuses on overdriven melodies & stage acrobatics