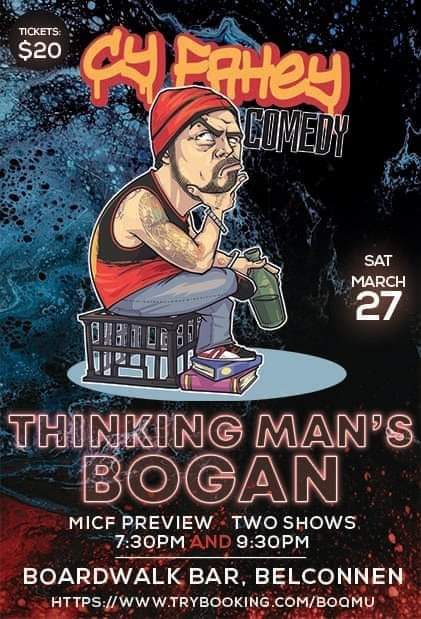 Could God create a JD so warm he couldn’t drink it?

Described as an “engaging presence” (Chortle, UK), three-time Deadly Funny National finalist Cy Fahey has a weirdness and confronting sense of identity to his humour, but what else would you expect from a Malaysia-born Aboriginal that looks Greek?

Performing comedy since 2008, every year he has written at least five minutes of actually good jokes and has decided to bring together his greatest hits, despite never having a first album.

As a veteran comic (that you’ve never heard of) In his solo hour, Cy’s “Thinking Man’s Bogan” puts his unique tongue-in-cheek spin on getting older, online dating and punching above your weight.

“Thinking Man’s Bogan” is for 16+, contains references to sex and drugs, but is ultimately a loving tongue in cheek reflection of a man trying to make sense of it all.

Cy hilariously weaves through some of the most perplexing questions of his life; ranging from the importance of spoons in a relationship, to screening Tinder dates… and whatever happened to the guy in the Solo commercials? If you’ve ever wondered what a bogan is or isn’t, if you’ve ever met one or just want to see one wax lyrical about the modern world, this is the show for you!

Cy has spent the last number of years honing his craft as a staple of the Canberra Comedy scene and is excited to finally be bringing his debut solo hour to life.