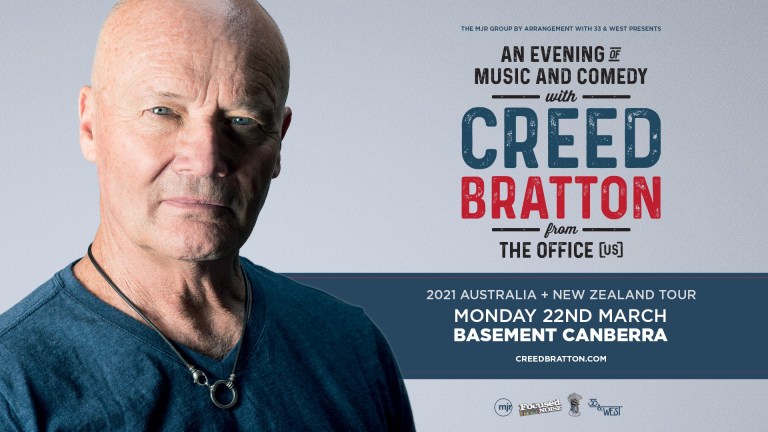 While the world has been confined to their homes, social distancing and writing fake, COVID-19 inspired episodes of The Office, Creed Bratton, his management and promoters have been looking for new Australian and New Zealand tour dates to ensure fans are still able to see Creed’s variety show tour.

The original tour dates for Creed Bratton’s upcoming Australian and New Zealand tour, which can no longer take place due to restrictions placed on travel and public gathering in Australia, have now been shuffled to March 2021.

Having been performing solo shows for over decade, Creed Bratton, who played an over the top version of himself, as the mysterious, quality-assurance director that smells like mung-beans, lives for scuba diving and can’t tell the difference between an apple and a potato, will now be landing in Australia next year.

Set to hit Australian shores in March 2021, Creed’s variety show – which includes live music, stand-up comedic and untold stories from both his life and time on ‘The Office’ – will land in capital cities around Australia, including Melbourne, Sydney, Brisbane, Canberra and Perth.

While many will know Creed Bratton as the mysterious, eccentric and hilarious character from the hit TV series ‘The Office’ (US) and for roles in comedic hits like The Mask, the US comedian is also an established musician, with a career in music that spans nearly five decades.

“Even though I’ve been told I may not get to bring back a pet duck billed platypus, I’m still very excited about coming to Australia for my first tour there,” said Creed Bratton.

In addition to live music from Bratton’s longstanding career, the live show will also include anecdotes from Creeds time on set of ‘The Office’ as well as the highs and lows of a careers that has to be heard about first-hand to be believed.

‘The Office’ has been off the air for five years, but Bratton stills packs clubs wherever he goes with rabid fans of the cult show – Rolling Stone