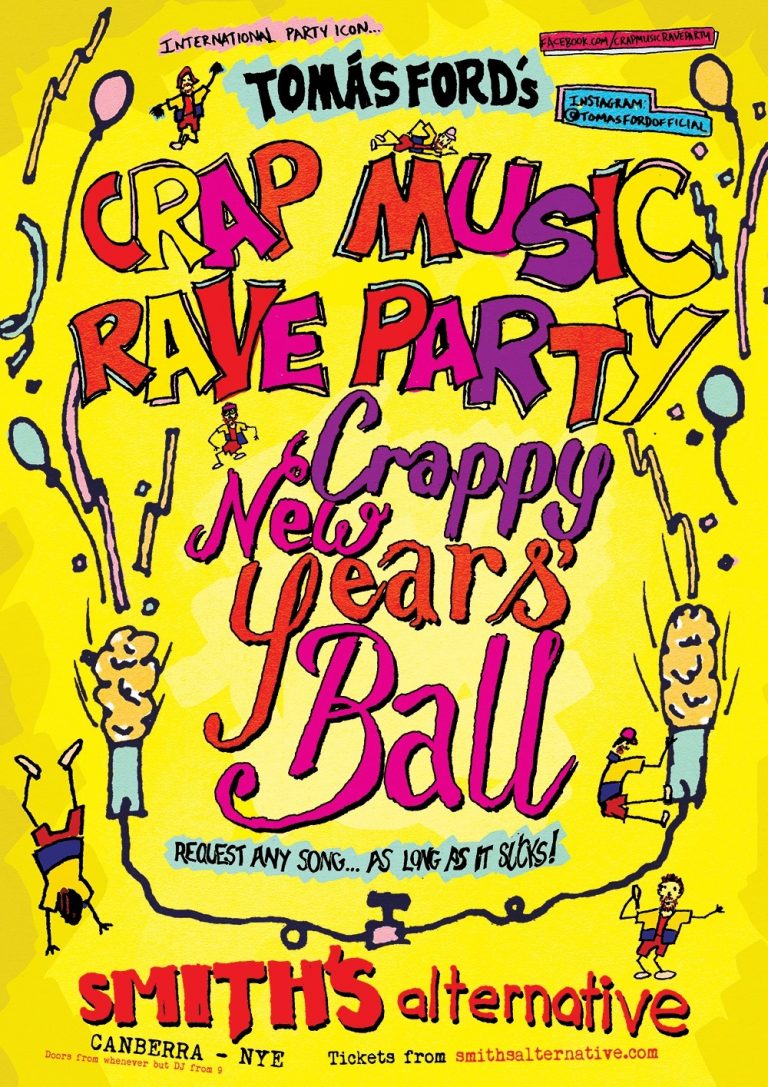 Tomás is the world’s most hyperactive DJ, proudly playing the songs you love to hate as he lipsynchs his way through the night, projecting home-cooked animated videos, serving up the finest hi-vis mining site fashion (I mean, he is from Perth), flashing his hardware store lighting with his hands, improvising low-rent drag shows and generally doing his best to be the biggest idiot in the room. You’ll be laughing and dancing all night.

Smith’s has become one of Tomás’ favourite places to play, with Canberra crowds offering predictably unpredictable requests and the quirky layout of the room making for ideal conditions for a big dumb dance party. So he thought he’d throw something a bit special; get in from 8pm for early-evening ridiculousness and gamez, before he hits the dexxx properly to bring you some full scale rave nirvana.

If you haven’t been before, Crap Music Rave Party is the place to ask for the trashiest pop music you can think of, so start thinking of your best worst pop tunes and, if they’re craptastic enough, they’ll get a spin. Need some ideas? What about Vanessa Amorosi, All Saints, Bee Gees, In-Grid, the theme from The Love Boat, J-Lo, Black Box, ATB, Bob The Builder cover versions, every song in A Night At The Roxbury, Jonas Brothers, Bananarama, Darude’s deep cuts, the Never Ending Story theme, Olivia Newton John, Crazy Frog, The Wiggles, Cosima De Vito… or if you really want something groovy, try some Savage Garden.

Tomás has sold out clubs around the world with his various ridiculous shows, including seven massive years at the Edinburgh Fringe festival where this party has become a smash hit annual staple. Most weekends you can find him throwing a party (or happily crooning one of his late night cabaret comedy shows) in some random place in Australia, New Zealand, Malaysia or the UK.

It all kicks off at 9pm on NYE at Smiths Alternative (though, Smiths being Smiths, you can come down for pre-drinkies whenever you want). It’s a cosy room with limited capacity that we can’t raise, and it’s definitely 100000% gonna sell out, so make sure you get your mates together quickly and book your tickets.