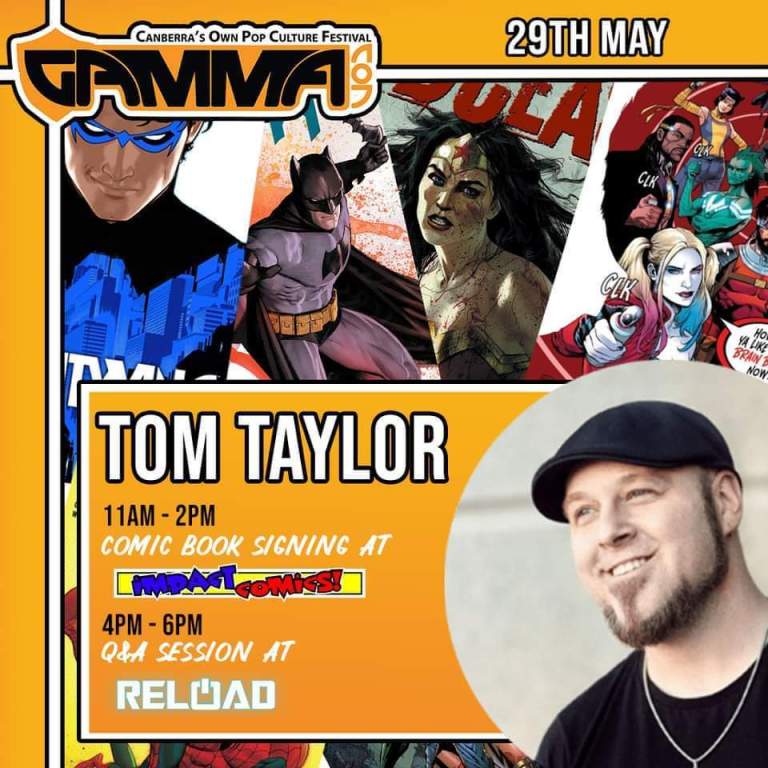 Australian #1 New York Times bestselling comic book author Tom Taylor will be visiting us on May 29th for a comic book signing at Impact Comics followed by a Q&A session at Reload bar & games!

Tom is well known for his work in Injustice: Gods Among Us, DCeased, X-Men Red, Suicide Squad and much MUCH MORE! (because, let’s face it, he’s done lots of things)

If you don’t already have something for him to sign, you’d better grab something! HEAD DOWN TO IMPACT TO GET YOUR ORDERS IN!

Other stuff he’s done… you might find them on the shelf or in the back issue bins:
DCEASED (paperback collected volume just came out!)
INJUSTICE: GODS AMONG US (multiple volumes!)
THE DEEP (the comic that inspired the cartoon!)
JUSTICE LEAGUE POWER RANGERS
FRIENDLY NEIGHBORHOOD SPIDER-MAN
SPIDER-GWEN
STAR WARS AGE OF RESISTANCE
WAR OF REALMS STRIKEFORCE
X-MEN RED
HUNT FOR WOLVERINE TP ADAMANTIUM AGENDA
ALL NEW WOLVERINE
EARTH 2 (New52)
MILES MORALES
…
Look there are plenty more…

Let’s see how you go.

Tom gets treated like a rock star when he travels to international comic shows, it is a big deal to get him to a signing in Canberra!