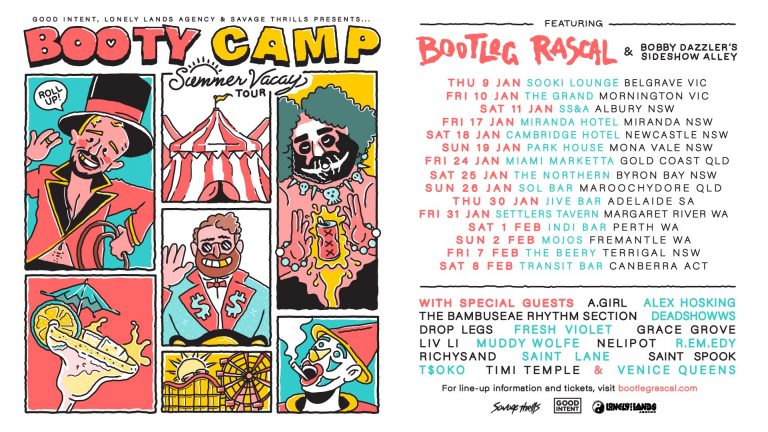 “Touring in more remote areas has always been something close to our hearts,” says guitarist Jimmy Young. “We get the chance to bring the show to music fans who might not get the opportunity to catch as much live music than those in major cities”.

The event will also feature some of the country’s most exciting emerging artists. “Jim and myself spent a lot of time working out what acts we wanted on the line-up’s,” says frontman Carlos Lara. “We’re really excited to see such a diverse offering of talent and we’re confident our fans will enjoy what they have to bring to the shows”.

The duo have also curated some special entertainment to take place in between artist sets. Titled Bobby Dazzler’s Sideshow Alley, the performance will feature a slew of “totally cooked” crowd participation games, including Pinger Piñata, Wheel of Misfortune, Pin the Toupee on Trump and Nah Yeah or Yeah Nah.

Since their mid-2013 inception, Bootleg Rascal have released a slew of singles, an EP and two albums, all warmly received by critics and fans around the world. Multiple tracks have been added to Spotify and Apple Music playlists, high rotation on triple j and they’ve performed on the stations esteemed Like a Version segment.

The band have continually traversed the globe playing multiple sold out headline shows in France, UK, Holland, Germany, New Zealand and Australia, and performed sold out shows in the USA. They’ve also regularly appeared on major Australian festivals including Falls Festival, The Big Pineapple Festival, Lost Paradise, Hills are Alive, Festival of the Sun and Party in the Paddock.