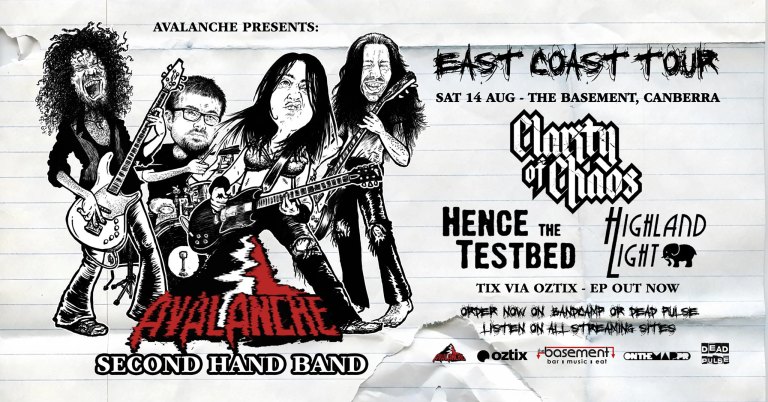 West Sydney Hard rockers Avalanche are on the road again for a massive 4 month long tour on the back of their latest single and EP release, ‘Second Hand Band’. The whole East Coast of Australia won’t be safe from their raucous, energetic live show. What to expect? Blood, sweat and piss, but most importantly of all, a good bloody time!

If you’ve ever thought that rock n roll is dead, or new music has nothing to offer, prepare to reconsider and be ready for a bit fat shot of rock n’ roll direct to your ear holes from Avalanche and their good mates; some of the loudest, heaviest and meanest bands in the scene today.

Joining them for their very first Canberra show at The Basement will be local legends Clarity of Chaos, Hence the Testbed and Highland Light!

Hence The Testbed
Canberra based 3 piece Rock band who specialise in turning up on time, beer tasting and taksa consumption. Young, sexy and vibrant they are not but they can belt out a song or two if provoked!

They first started playing and rehearsing together in a steel factory after work, and after just 2 short years, they’ve firmly cemented themselves into the sticky floors of the national underground scene, with several releases, major national & international airplay, their own music festival, and a signature sound & live show which routinely leaves the audience covered in blood, sweat and spit.

Avalanche are hard rock. As only 20-somethings from Sydney’s West; famous for producing tradies, drongo’s and long-arse Centrelink queues; can do. Their unique sound is tinged by the influence of their dad’s record collection and the dirty pub rock of Australia’s past, but played through the interpretation of their own generation.

The band is made up of the sheer force of nature that is lead vocalist and bassist Steven Campbell, pictured; shirtless (always). The tall, dark and aggressively powerful lead guitarist, Veronica ‘V’ Campbell, often seen playing on the floor, in the crowd, and even in the toilet. The arse-tight Ryan Roma aka ‘ADHD’ on drums, and rhythm machine and life of the party Arthur Divis on rhythm guitar. Together, Avalanche continue their bloody, sweaty on- stage rampage, giving no f/ks and winning new fans every time they play.