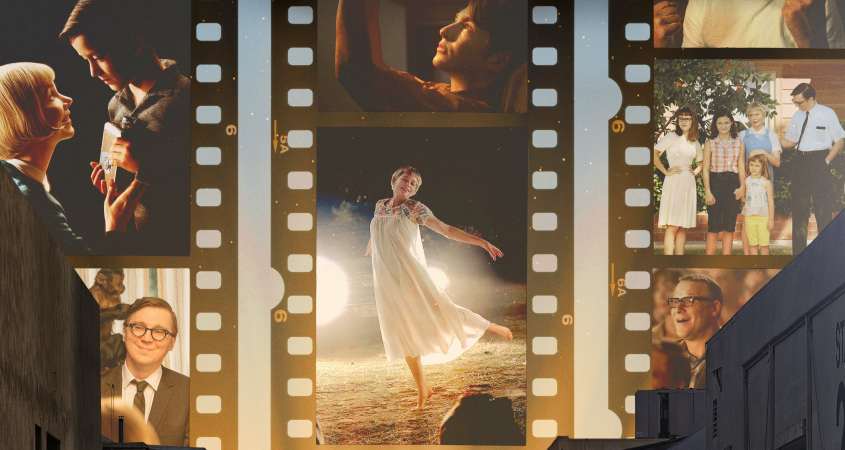 In the early 1960s, the young Sam Fabelman (Mateo Zoryan) discovers the ability of cinema to cast a spell over the mind and, with the help of his mother, Mitzi (Michelle Williams), makes the first of many short movies on the Super8 movie camera that his father, Bert (Paul Dano), uses to record family events, including Sam’s Bar Mitzvah.

Sam involves his three sisters and many of his friends and classmates in his ever-more-ambitious film productions, entertaining audiences of many dozens of parents and children with the results.  Along with his mother, it is his father’s best friend and work assistant, “Uncle” Ben (Seth Rogen), who mostly supports Sam’s artistic endeavours.  But, by Sam’s teenage years (now played by Gabriel LaVelle), his father is increasingly concerned with Sam’s education and future career, although he still encourages his son’s “hobby” in recording family events.

When Sam’s grandmother dies, Mitzi’s Uncle Boris (Judd Hirsch) appears at the family home to share the period of mourning.  Whilst Uncle Boris, a fearful figure from Mitzi’s childhood, has a large, even intimidating, presence, he brings an extraordinary vitality into the home and has a profound effect on Sam.  Uncle Boris tells it straight.  Either Sam will face the hardships and heartbreaks incumbent on the true artist’s pursuit of his unquenchable passion or he will be a prisoner to an unfulfilled, if financially and socially successful, life.  The choice is Sam’s.

Soon afterward, Sam suffers a shock through the power of film to capture and reveal devastating truths, leaving him angry and bereft of faith.  And, just when things don’t seem to be able to get any worse, his family moves to another state, and Sam finds himself in an unpleasant world of antisemitism and bullying that is condoned or ignored by all around.  Here he also experiences the imbroglio of first love and loss, along with the rending of the bedrock of his life.  When irrational prejudice, Sam’s love of the truth, and his love for his parents finally collide, it is his capacity to move audiences through shooting and editing scenes from life that will help him and those around him transcend their former limitations.

Williams’s and Hirsch’s especially engaging characters of Mitzi and Uncle Boris, diverse personalities as familiar as those we meet in our own lives, and performance subtleties all round lend The Fabelmans a rounded credibility that succeeds in drawing us in to Sam’s nascent filmmaking career.  Referring as the film evidently does to the early years of its director, Steven Spielberg, the film helps us see the world as does somebody with an enormous talent for storytelling in film.