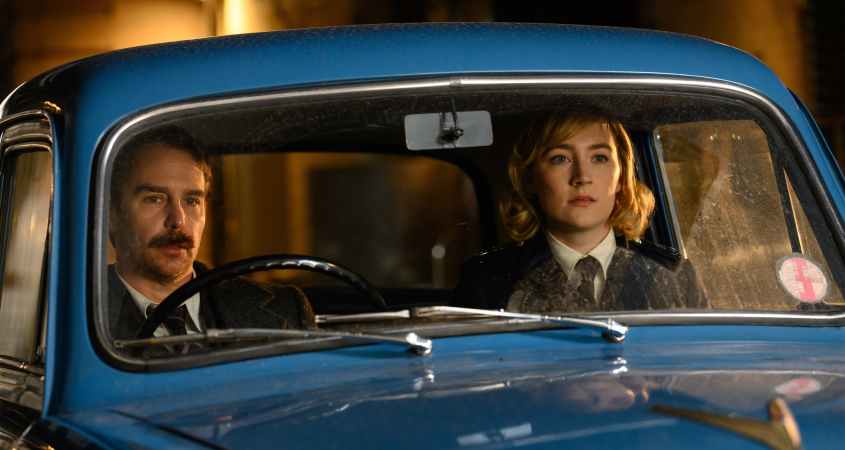 It’s 1953 London, and theatre’s rich and glamorous have come out to celebrate the 100th performance of Agatha Christie’s The Mousetrap. Amongst the beautifully turned out and making his unpleasant presence felt is American director Leo Köpernick (Adrien Brody), bent on persuading the producer John Woolf (Reece Shearsmith) to allow him to direct the play’s film adaptation.  Köpernick’s bad behaviour raises tensions in the assembled polite society and, in particular, leads to a showdown with rising star Richard Attenborough (Harris Dickinson), after which Köpernick weaves his drunken way out of the party.

Things are just starting to calm down when murder most foul is discovered backstage.  Enter Inspector Stoppard (Sam Rockwell) andhis dedicated offsider, Woman Police Constable Stalker (Saoirse Ronan), both determined to find out whodunit.  With no one involved above suspicion, they delve into every possible angle to winkle out motives and secrets, the owners of which are strongly disinclined to have them laid bare.  Most urgently, can Stoppard and Stalker find the murderer before he or she strikes again?

Fabulously gorgeous costumes, fabulously luscious sets, fabulously moody cinematography creating a 1950s feel, nods to old favourites, a terrific cast, and a plot full of delightful surprises make See How They Run a wonderfully quirky, tongue-in-cheek murder mystery with never a dull moment, and audiences will love the ride.  Whether or not Agatha Christie would approve is another question… but anyone with a funnybone is sure to applaud this refreshing tale, so sit back, relax, and enjoy a little time in the lavish, if murderous, world of See How They Run.