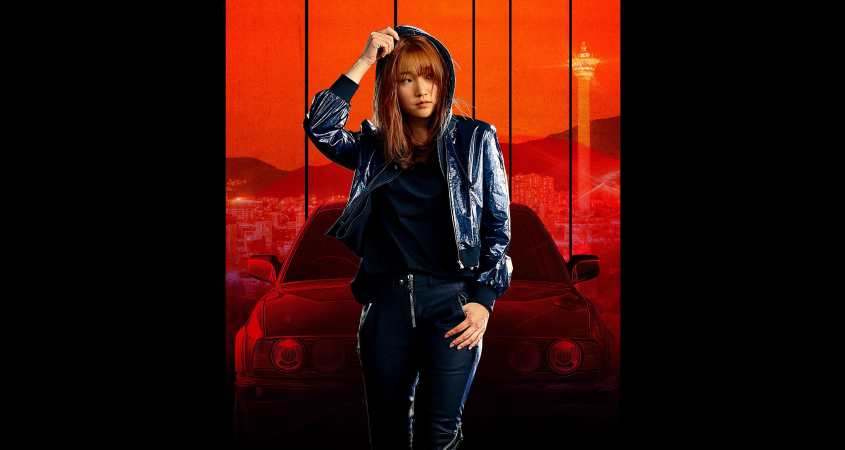 North Korean defector Eun-ha (Park So-dam) works for an innocuous vehicle recycler, bringing in cars for scrapping or rebuilding. But she’s also the boss’s specialty driver in his confidential side business: delivery of “everything that the post office doesn’t handle”. We see plenty of Eun-ha’s driving, and it soon becomes clear that what Eun-ha can’t make a well-tuned vehicle do isn’t worth doing. Though she’s utterly fearless in her job, Eun-ha’s only human connections are with her boss, Baek (Kim Eui-sung), and her fellow worker Asif (Han Hyun-min) — until Seo-won (Jung Hyeon-jun), a boy of about nine, becomes her next delivery package and awakens her compassion.

Unfortunately, Seo-won holds the key to a $30 million bank deposit that the head of an illegal gambling racket will stop at nothing to obtain.

With remarkable stunt driving and close action cinematography; well cast, watchable, likeable rogues on the one side; and on the other side a host of highly dangerous and most unsympathetic characters chasing down Eun-ha’s nine-year-old charge, Special Delivery does a remarkable job of immersing the viewer in non-stop action. The movie’s pace varies nicely, though, from spills to thrills and a good few laughs, and leave its protagonists and their special package very likeable — and mostly in one piece.

Convincingly acted and utterly engrossing, Special Delivery makes a worthy opening to the 13th Korean Film Festival in Australia (KOFFIA) in all four Australian capitals. The festival’s remaining films are selling fast or have sold out, so perhaps as the festival grows it will become able to rescreen some of its most engrossing films. If it does so, Park’s Special Delivery would make a deserving inclusion.

KOFFIA 2022 is screening at Palace cinemas.