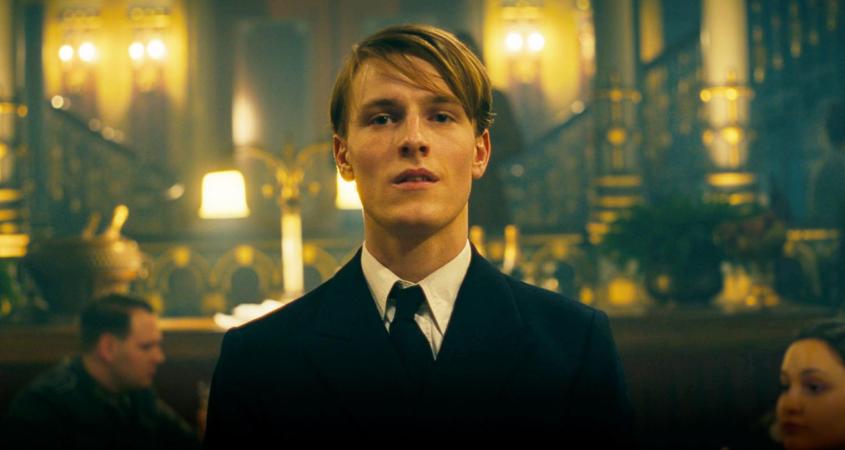 Samson “Cioma” Schönhaus (Louis Hofmann) is under threat in Nazi Germany.  His Jewish parents and grandmother have already been rounded up and sent to the east, and Cioma remains at (limited) liberty only through a temporary “exemption” for his work in an “essential” industry: weapons manufacture.

Used to defying risks, Cioma habitually arrives at the factory right at the start of his shift.  Arriving late once too often, though; and on the verge of losing his job, his exemption, his home, and his life, Cioma welcomes an offer of alternative work that will please his aesthetics as well as his ethics: forging passports so that others can escape the Nazi net.  This work, obviously not sanctioned by the Nazi state, will not protect him, though.  And anyway his overconfident first attempt at it gets him fired.

The inclination of his best friend, Detlev (Jonathan Berlin), is to protect themselves by keeping to the shadows.  But Cioma, ever the risk taker, chooses rather to hide in plain sight, using disguises as Nazi uniformed and plainclothes officers of one kind or another as his camouflage, and persuades Detlev to take the same approach.

What follows is a thriller in the classic mould, replete with narrow escapes and daring bluffs.  Yet the tale reflects in all essentials the autobiographical account by Cioma himself of what occurred (Der Passfälscher, originally published in 2004, and since translated into English as The Forger).  In fact, Schönhaus forged hundreds of passports and thus saved many lives.

The Forger not only shows a formerly untold viewpoint in resistance to the Holocaust; it also makes great entertainment as Cioma Schönhaus repeatedly, if barely, foils attempts to capture him as he strikes repeated blows against the Nazis’ open if unacknowledged mass murders.  Don’t miss it.