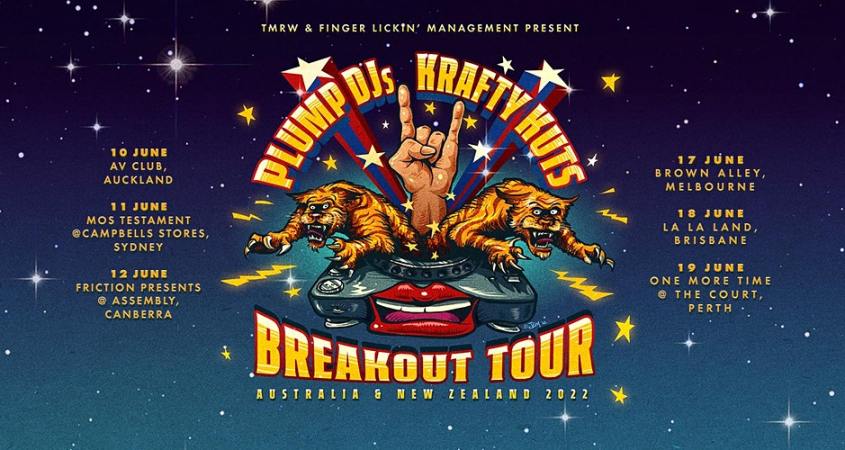 Ladies & gentlemen & everyone in-between and beyond; it is with great pride and excitement that I welcome you to a very special edition of The Drop.

I am joined at this time by two leading exponents of the UK breakbeat scene – Lee Rous and Martin Reeves – best known to the wider beat ‘n’ groove loving community as one half of the Plump DJs (with Andy Gardner) and Krafty Kuts respectively.

It is with incredible pleasure that I learned that two of my favourite breaks merchants were not only touching down in Canberra, but playing on the same night (Sunday, 12 June at Assembly – The People’s Pub).

Both Rous and Reeves have been plying their trade for decades now, and I’ve known them for about as long. Way back in the day, when I was but a humble Uni-dwelling scribe for this ‘ere rag, I would burst at the chance to interview either chap as they made their way down for the annual summer jaunt during the giddy halcyon days of early-mid 2000s.

Reeves was good enough to sign my Wild In The Aisles vinyl after a 2005 gig at Manuka’s Club Habana. Rous was kind enough to get me and my then-girlfriend on the door, and subsequently past the velvet rope of the VIP area, of the mighty Fabric nightclub. I say this not to boast (weeeeeell… maybe a smidge) but to highlight that not only are these gentlemen p-funk powerhouses, they’re bloody lovely to boot.

So in celebration of their imminent Canberra double-header, let’s get to know the lads better; from twinkling beginnings to future plans, to their favourite tracks and artist recommendations, and much more in-between.

Can you trace back to a pivotal moment in the past that, without it, you wouldn’t be the breakbeat baron you now are?

LEE: There was a moment when the penny dropped, a moment of clarity. Every time I played breaks to people there was, to put it simply, ‘an energy lift’. And so I thought, I must do this more! The same thing was happening to many of our friends and DJs of the time, it was definitely a growing trend. So lucky to have had that realisation, hey.

MARTIN: I remember things started to get really busy after I wrote Tricka Technology with A.Skillz. I felt I needed to go back to my breakbeat roots, and started writing the Freakshow LP in 2005-2006 which was a pivotal moment in my career.

I said to my manager, and Finger Lickin Records label owner Abel Reynolds, that I need to mix some styles up with hip hop, mid-tempo & breaks all in one LP. I started collaborating with some amazing artists like Jungle Brothers, Dynamite MC, and Tim Deluxe, and things just started to fall into place.

The LP got picked up by a big label in Australia, and in 2008 I did the Big Day Out with Dynamite MC. Massive crowds, amazing shows, and my music was being played on Triple J & George FM regularly. The Brisbane show was mind blowing. Everything just seemed to flow for the next few years, winning awards for my Freakshow LP and my DJing, playing at some of the best clubs in the world; it was an amazing time.

Having presided over the scene for decades now, what are your thoughts and feelings on how it’s all developed?

LEE: That’s a big question Allan, and a lovely one, though it may require me to write a book to answer it with just fullness. In short, breakbeat was one of the most popular genres in the world for over a decade. Then it self imploded and went back underground.

Now, due to many factors, it’s come back to the world’s attention and is being enjoyed by millions. We feel exceptionally lucky to be part of the genre, and love playing and making new breaks records still. As always, we’re down at the Soho Studio three days a week trying to find new ways to make ‘em dance!

MARTIN: The breakbeat scene has certainly had its ups and downs, that’s for sure. There was a period where it just lost its way and quite a few DJs moved on to other genres. This didn’t help move the scene forward and the sound became hard, heavy, and fast, and the music lost its origins.

Over the last few years we have seen some of the biggest acts in electronic music use breakbeats in their tracks and this has helped put it back on the map once again. Plump DJs, Freestylers, Stanton Warriors, Deekline, Yo Speed, Guau, Keith Mackenzie, Franky Wah, Bicep, and myself have all been putting out good music, the quality is starting to come through, and the scene has definitely started to grow again.

I have a full diary till October and I’m travelling the world once again. It feels good to see breakbeats doing the business.

Has your approach to making, and mixing, music changed over the years? If so, in what way?

LEE: The only thing that’s changed is that we now get creative from 10am to 4pm instead of 7pm to 11am.

Also, we now utilise every conceivable modern production technique, as well as using all the good and graceful old analogue beasts that adorn laboratory de Plump.

MARTIN: My approach has totally changed. I work with a guy, Alex Chambers, who is a wizard in the studio, and together we make so much music. I have to cater for my fans on Patreon, Bandcamp, and then there is the full releases on Beatport, Spotify, iTunes, Juno, and more. I feel at this moment I am writing by far my best music and working with some amazing vocalists to give my fans a great balance of the music I have written over the years.

What would you pinpoint as one of the proudest moments of your career?

LEE: I think having the good fortune to have been able to take our parents to Fabric Room One, when we were headlining at Eargasm back in the early 2000s. It was incredible that our folks got to meet each other and we all were able to share in the experience. They danced in the DJ booth and got caught up in the headphone cables.

We stood on the balcony together afterwards and reflected on the hedonism and sincerity of the event. The Fabric team looked after all of us so well, even when things got naturally a bit wobbly.

We all danced, we all sang. So much love. Enough said.

MARTIN: I have had so many proud moments in my career I don’t really know where to start.

Watching my twin boys dance to 10,000 people on stage at Field Day in Sydney was very special. Winning best LP & DJ at the Breakbeat Awards in London, and also Best International DJ in Australia, was mind blowing. Writing an LP with Chali 2Na from Jurassic 5 was a very proud moment in my life as it was something I could not have dreamed would happen.

To be honest, I can’t single out a favourite moment as they were all so good.

If you had to choose three of your tracks to send into space (or bury in a time capsule), which would you pick and why?

LEE: I would say our War Galaxy Remix as it was so deeply from our disco heart and captured our best free-for-all creative flow.

Our Electronaughts Bumper Remix is another, as it was one of our greatest achievements. It took six weeks to make, and somehow it’s still ahead of its time. The detail in that record is exquisite and I think Andy would also agree that we were a little crazy at the time and that helped us to push the boundaries.

The third record would either be our recent Robert Owens Remix of Wishing Well, or our latest single Gotcha on Against the Grain records for which we landed the No 1 Beatport Breaks Chart position.

MARTIN: Well, that is a great question, as I have written so many tunes over the years.

I think my first one would be Bass Phenomenon as this was my first big club tune, and sonically it sounded so big on the system. I remember playing it in Brighton the day after I had made it with Tim Deluxe at my night Supercharged and was like, ‘Oh wow; this is a monster!’

The next one has to be Gimme The Breaks with A.Skillz and Kurtis Blow. I always loved the original by Kurtis and to recreate this classic was not easy. But after a trip to New York we nailed it, and I think it still stands the test of time. We had an incredible moment playing this live with Kurtis at Field Day just after Groove Armada. It was emotional!

Last but not least is Hands High with Chali 2na. I think this captures a great moment in my career where I got to work with such an iconic artist in Chali. It was such a fun record to make and it put us on the map as an act together. We played so many shows after writing this one song; it was incredible.

Other than yourselves, of course, who should discerning music lovers be checking out?

LEE: We are going crazy at the thought of seeing all of you magic ones again. Martin and I have arranged something super special for the trip, and I have all our classics cuts remastered to play alongside some more recent, inspiring breaks numbers.

This year Andy (Gardner) & I are celebrating three new singles on release and the relaunch of the legendary Against the Grain records, which is now based in Australia.

Plus our Replumped remastered classic breaks album. Sooooo  much to enjoy. And that’s not forgetting the largest group hug ever following what’s been honestly the shitest time. It’s really time to start making good out of bad, and break out of the chains that have kept us down for far too long. We are only weeks away! Love with a capital ‘E’  😉

MARTIN: Myself, Aston Freestylers, and Lee Plumps have formed a new act called King Of The Beats which is very exciting and we have some incredible shows lined up this summer.

I have two new LPs coming out over the next year. I remixed The Adventures Of A Reluctant Superhero LP (Chali 2na) and started work on my next solo LP. I have relaunched Against The Grain with Lloyd aka Skool Of Thought (Oz) and we have a ton of great music coming out which we are both buzzing about.

Myself and Lee are planning something very special for our forthcoming shows down under and we are super excited as it’s been a while so we’ll be bringing the monsters!

You can catch Plump DJs’ Lee Rous and Krafty Kuts on Sunday, 12 June at Assembly – The People’s Pub for a special 2pm start. Tickets are $36.72 – $46.92 via Moshtix. Brought to you by Fiction Presents & Assembly.