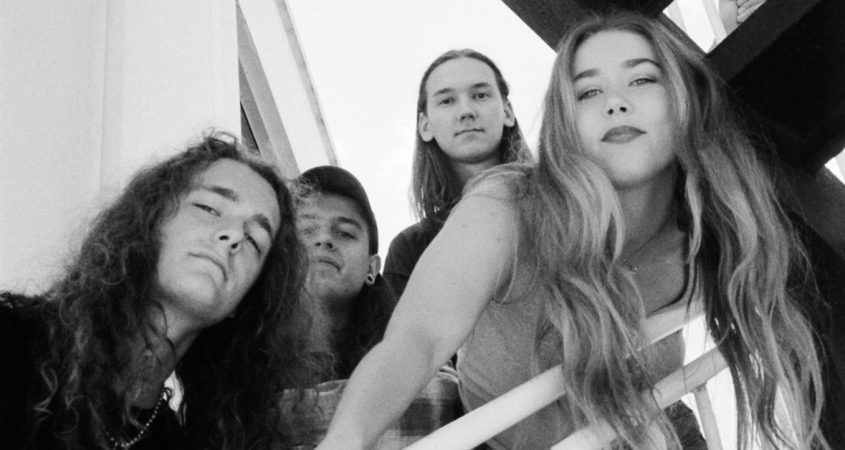 Charlotte & The Harlots were formed in Canberra in 2017 by frontwoman Charlotte Jenkins and drummer Daan Steffens. They were joined later by bassist Jasper-Kemp Myers and lead guitarist Luke Schiffer.

The band released singles, and a debut EP in 2019, and have since then solidified their power grunge pop standing. They’ve played a series of live shows, including sharing the stage with the likes of C.O.F.F.I.N, The Neptune Power Federation, Teen Jesus and The Jean Teasers, Hard-Ons, and Witchskull.

The latest release for the band sees them in fine fiery form, creating a captivating four minutes of post-grunge power-pop pulsing with energy, melodic know-how, and combustible performances. All this crowned by Charlotte Jenkins’ undeniable super-charged presence, a combination of rock soul and alluring, refined swagger.

Charlotte & The Harlots’ – a cohesive hybrid of style

The track is a cohesive hybrid of styles. It bridges the moody inferences of an early ’90s grunge spirit to a contemporary rock sensibility. With a dash of power punk for good measure.

From its bass-centred intro parts to the high dives of the chorus—regarding the chord changes, the melodic twists and turns—Hit The Limit reveals a band with a self-assured focus and an enthralling, career jumping-off point.

The chorus, in particular, straddles a curious intersection, utilising these fused styles to generate a rousing refrain with an equally enticing lyric.

Come on, now; we all want to say it at some point, right:

Everything you are to me, you’re my best friend.

There’s more to say about the chorus. Its surprise take-off, bouncing off an almost classic rock all-in accent to the title’s veiled command, soon cascades into that bracing, staggered series of notes.

And the performances behind it all add weight and energy. The drum part is notable for its services to that melodic structure. Each beat marking the track’s moments of controlled chaos.

Hit The Limit will set Charlotte & The Harlots’ upward trajectory in motion. It’s a no-brainer track that delights on all sorts of elevated levels.