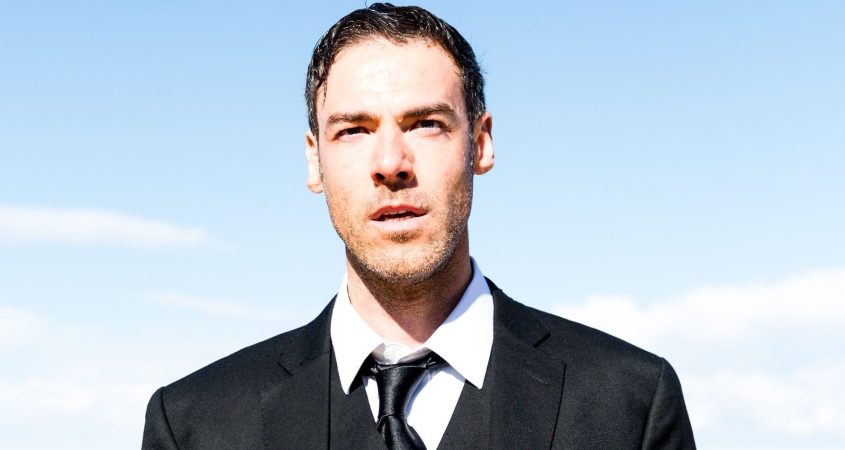 “I’ve read The Stranger four or five times over the years, and it gets under my skin. It jolts my perspective of how I go about interactions for the weeks during, and afterward.”

So says Irish-born, Canberra actor Christopher Samuel Carroll about French-Algerian writer/philosopher Albert Camus’ 1940s classic The Stranger (also know as The Outsider). He is taking on the daunting task of turning the text into a one-man show. Throw in a two-month break for lockdown, and it’s an even more perilous exercise.

The existential, absurdist story explores the alienation of an individual who refuses to conform to social norms. Meursault, the anti-hero, will not lie. When his mother dies, he refuses to show his emotions simply to satisfy the expectations of others. And when he commits a random act of violence on a sun-drenched beach near Algiers, his lack of remorse compounds his guilt in the eyes of society, and the law. It is, in short, a real thinker.

Carroll, a talented mainstay of Canberra arts, is known for his physical theatre. His upcoming show marks his sixth solo venture.

“Solo work is a very particular form of theatre to do as an actor,” Carroll explains. “It’s rewarding in that it connects you in a very pure way to the audience. There’s incredible freedom in it. You’re lacking other performers, of course, and the reciprocal energy generated. But it means you become sensitised to everything the text is giving you. And everything in the atmosphere of the room that particular night with the audience, what you’re doing, how that’s landing, how that’s resonating in the space.”

So of all the world’s stories, and with complete autonomy of choice that a one-man show provides, what led Carroll to The Stranger?

“It’s different to the solo shows I’ve done before,” he reveals. “I’m known for doing physical work. But fundamentally, I trained as a classical actor and have a strong relationship to great text, great words, well written characters. Complex, sensitive, challenging stories.

“The Stranger is all about the text, and the acting of the text, and bringing the honesty of it,” Carroll continues. “I have an image in mind of this slow burning cigarette; this contained smouldering energy that carries through this subtle, meditative journey of this character. There are still moments of high emotion, and high drama. It’s theatrical. But it’s not all explicit.

“Personally, with theatre, I love being able to suggest; to make an offer to an audience to come and lend their own imagination, and participate imaginatively on stage. Become co-creators.”

Co-creators we may be, but the fact remains that Carroll is alone on that stage. As such, he is able to examine the material in the most intricate of ways.

“I find The Stranger darkly funny,” he says. “It’s dripping with an irony that really appeals to me. I imagine it’s an Irish thing as well. It’s deeply human, and I feel that sense of heaviness. It’s something I carry with me. I’m a foreigner in this place. I’m someone who emigrated. So to an extent, I felt like an outsider. And the place that I came from, I never really felt like I belonged there either.

“But then again, maybe that’s part of an artistic disposition as well. It’s taking a step back, looking at things from a different angle, because you don’t really feel a sense of belonging.”

It’s clear by now that the big ideas contained within The Stranger resonate with Carroll. Of course, there would have to be a strong drive to put on such a solo venture, with the prospect of memorising many, many thousands of words being a nightmarish one for most.

It is here that Carroll gives a generously detailed and thoroughly fascinating insight into the process; from inception, through development, up to a cautious state of readiness.

The Christopher Samuel School of Learning Lots of Lines

“It’s a big confrontation with yourself; a big, big challenge that you put in front of yourself,” he says. “It doesn’t feel real, at first. It can be quite fragile, up until a certain point until it becomes tangible, which only starts happening once you’ve made certain commitments to it becoming a real thing.

“When you get a great designer on board, you’re talking to them, they’re getting excited, you’re getting excited back, you do photos, talk to the venue, and… it becomes more real. Up until that point, the idea only ever feels as good as your confidence in yourself on a given day.”

And this confidence has to be self-fulfilling, with no actors to bounce off.

“You have to create a cause and effect – as happens with other actors – within this massive monologue of one line next to another next to another,” Carroll explains. “It’s about linking the character’s thoughts.

“[Rehearsal is] just me sitting by myself for hours, just mumbling the thing, one line at a time, and then two lines at a time, then small chunks of paragraphs, then a quarter page, and then a half page. Then taking a break for 20 minutes, and turning my mind off by watching the least taxing movie you could possibly watch. It’s like cramming for an exam.”

From here, the indefinable process of taking words and incorporeal ideas and setting them into the concrete of memory occurs. Again, and again.

“There’s different layers that happen,” Carroll explains. “It’s a terrifying alchemy of the mind that you don’t fully feel in control of. You just put in the hours. These words, you’re gorging them; cramming them into your memory. And maybe this feels so painful because you’re actually forming new synapses. My brain is creating new things rolling into existence.

“I have this analogy of, like, plowing furrows. And it’s very much an analogy, because I’m a city boy, what the hell do I know about farming?” he smirks. “But you know, the idea of breaking the hard topsoil, plowing the furrows so that, ultimately, something will grow.”

This Groundhog Day approach to absorbing The Stranger naturally leads to a deep understanding of the material, with countless hours poured into the comparatively, and eventually, brief performance.

The trick, though, is to not show your working.

“On stage, you live out under two hours of the character’s life, but you get to do it to a kind of depth that comes from all that time and energy and focus and concentration into what is, ultimately for the audience, a show.”

It is the perpetual paradox of the great actor – rehearse so well that it appears the characters are saying the words for the very first time.

“Yeah, it is a paradox. I know,” Carroll confirms. “That freedom that comes from being able to let go, to not have to think, and to hide all the work that you’ve done.

“The audience hasn’t come to see your technique. If you’re doing your job, they’re engrossed in the story and the character. And in a sense, you can disappear into the character absolutely.”

Finally, we have the performance space. For a story with such big ideas, Carroll is determinedly set on a smaller environment.

“Being in a small theatre, the character and his actions are there to be examined by the audience. To gain an individual insight into this man. He’s absolutely flawed, and you can pick apart his actions, but as the hero of the story, there’s still so much about him that’s relatable.

“I want to create something that’s intimate, that has the effect of stepping from the world outside and into the space of this world. I want the audience close enough to share that space with every little moment. Every little impulse can be witnessed and felt; they are drawn into the intimacy and solitude of the character, rather than having to dial up everything to 11 and hit the back rafters.”