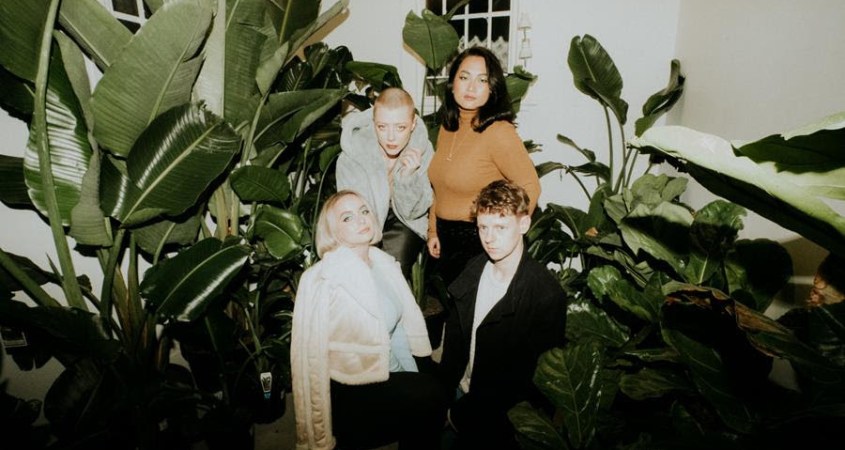 Canberra based band Moaning Lisa has been steadily releasing EPs and singles and collecting praise and prime live supports since 2017. This new single, along with the album Something Like This But Not This due out in October, will undoubtedly add to the ever-growing teams of allegiance.

Inadequacy is the band in a somewhat measured mode. It’s a trampling rhythmic pulse thickened with muted fuzz and a drum feel whose restraint gives the verses an amiable sort of tension. The melodic structure from the outset is also controlled, allowing the straight meter to affect an adjoining sense of trickling heat. All the while, textures such as vocal harmonies and snippets of liberated guitar signpost what’s to come.

And what’s to come is a chorus that takes flight.

A post-grunge styled riff underpins a chiming melodic line. Its further sweetened by a suite of buoyant vocals and an overall souped-up energy flow.

Inadequacy has two distinct sound identities. The verses intone a clear-eyed confession, with lines that reinforce this, such as ‘my greatest mistake is one I get to make’*. It then segues into choruses that don’t merely poke around the emotional centre but transmit directly from it.

The balance works. The shade before the avowing light carries the song right up the conclusion’s high harmonies and cloudburst guitar, wrapping up the exposed perspective with a seemingly impromptu edge. The accompanying video for the track is also split.

Wrestlers are first revealed prepping for a skirmish. At the same time, the band is positioned not inconspicuously around them in the verses. Combatants are then leaping and lunging at each other in the chorus.

Of course, this is a symmetrical visual redoubled by the agile dynamics of the track. Yet, despite the video’s gritty, good-humoured, and quasi-truculent tone, the song doesn’t necessarily need anything else. It has a glimmering indie dream-pop kineticism bolstered by an aggregation of committed, piquant performances.

A persuasive appetizer for the album.

You can pre-order/pre-save Something Like This But Not This here.

You can hear Moaning Lisa now on Spotify.

*there was some confusion over this lyric, when @CateManhatten on Twitter politely pointed out that she thought the lyric was actually “my greatest mistake is one I’ve yet to make.“ As Moaning Lisa themselves confirmed, Cate was right. The band went on to say, “but always a big fan of people drawing their own interpretations from what they hear!” because they’re really nice like that.