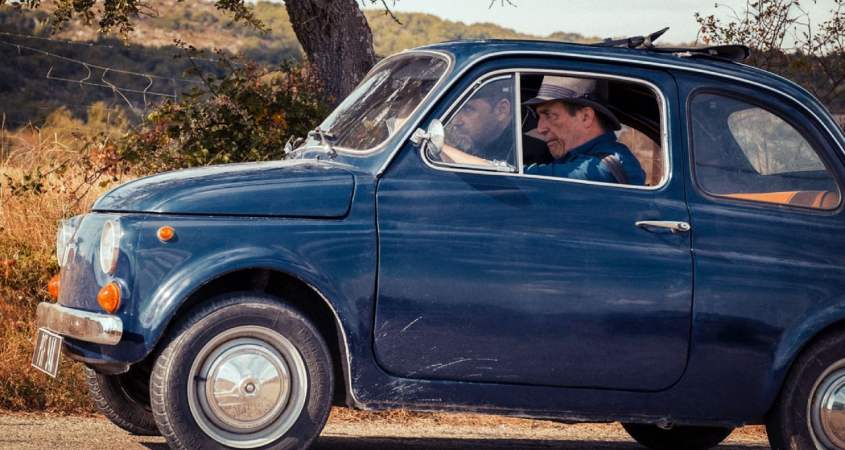 Every so often, a film, a play, a novel, a biography comes along that quietly converses with your soul in a wordless language in which memory and meaning, intent and sentiment, understanding and action, are one, when past and future impress themselves inevitably upon the present, and we need be only who we are.

Seemingly essential to such a work is a character — at least one — whose heart is larger on the inside than on the outside: large enough to embrace whatever life throws at it. The work’s subject, its plot, its story arc may not matter; it may be unrecognisable or nearly impossible to describe. And if the story is repeatable, its outline may be inadequate to explain the mysterious joy or sadness the work evokes.

Have I just given away the entire content of The Man in the Hat? No. In fact, it is a story, and an engrossing one; a road trip of sorts by “The Man” (played by the veteran actor Ciarán Hinds); a pilgrimage, perhaps; a series of seemingly preordained coincident and coincidental surprises that faintly echoes some of the oldest stories we know; a simple story, at heart, of simple things, and told with barely a word spoken throughout.

But it is beneath the almost wordless story of this journey — beneath its allegory to the wealth of life’s essential mysteries and revelations, its imponderable cycles and connections, its changelessly unending variety — that the film speaks to us in that language without words. In this language of the soul, a language that we hear too rarely, that The Man in the Hat co-directors John-Paul Davidson and Stephen Warbeck are fluent. And it doesn’t hurt at all that the film’s visuals include the most gorgeous cinematography of northern France.

The Man in the Hat is a rare gem, and it does feature wonderful characters and whimsy. Yet I can’t explain what makes it a work of such spiritual nourishment. I can say with reasonable confidence, though, that your life will be the poorer for overlooking it.