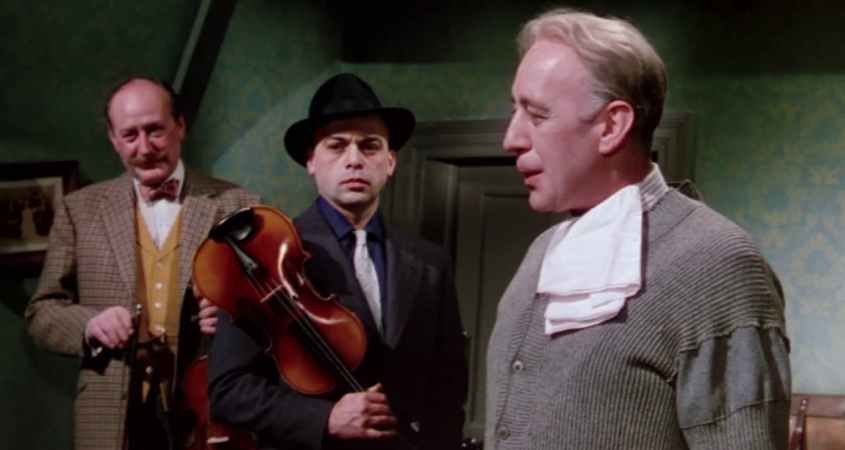 Criminal mastermind “Professor” Marcus (Alec Guinness) has devised yet another ingenious heist, in which he has enlisted four others to assist: Claude (Cecil Parker), Harry (Peter Sellers), One-Round (Danny Green), and Louis (Herbert Lom). “Professor” Marcus hires a room in the home of an elderly lady, Mrs Wilberforce (Katie Johnson), as somewhere for the gang to refine its plans, using as its cover the pretext of rehearsing as a string quintet.

With all other elements of the plan in place, one vacancy remains: somebody to safely cart the money back to the house they’re using.  When the gang settles, with some difficulty, on a decision to use Mrs Wilberforce as its patsy, little do its members suspect how badly wrong their plans can go.

Mayhem and murder are clearly on the cards and Mrs Wilberforce may be an endangered species; but The Ladykillers involves viewers through comic disaster rather than anxiety. The gangsters are so incompatible with one another and with the genteel standards that Mrs Wilberforce imposes that anything might go wrong — and frequently does.

Though the film was first released in 1955 and is unmistakably set in a bygone era, The Ladykillers’ humour hasn’t dated at all. Neither has the quality of its visuals or sound: with this Technicolor 4K digital restoration, it has come into a well-deserved new life that offers a chance to see masters of existential humour at work once again.