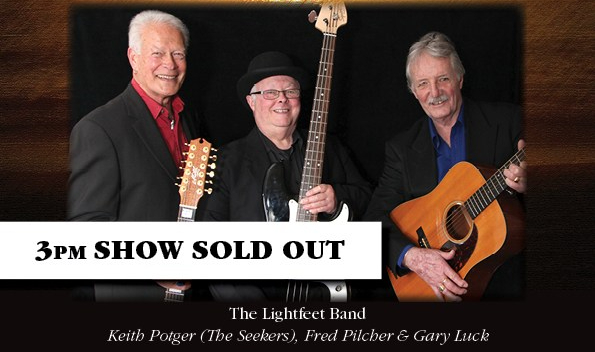 Canadian Gordon Lightfoot is a folk/pop legend, with a string of big hits, particularly in the period 1963 – 1978. Love of his music inspired the formation of The Lightfeet Band, comprising Keith Potger (ex-The Seekers), Gary Luck and Fred Pilcher. They created a two-hour tribute show Sundown – The Gordon Lightfoot Story covering all Lightfoot’s major hits.

Enthusiasm for Lightfoot’s music saw punters from Canberra, the Braidwood area, and even Sydney fill two shows in the historic National Theatre at Braidwood, which started its life as an ice-skating rink in 1921.

An impressive array of guitars lined the stage as Potger, Luck and Pilcher took their places, with the trio frequently changing instruments. The show included stories of Lightfoot’s life as well as the songs, with Luck (who had actually met Lightfoot) as the main spokesman.

The trio took turns in taking the vocal lead, with them occasionally combining their voices to great effect. Luck had the tone closest to Lightfoot’s voice.

The hits in the set list included Carefree Highway, The Wreck of the Edmund Fitzgerald, Cotton Jenny and If You Could Read My Mind (which Lightfoot never got to sing at the Grammys because he refused to shorten the song to fit the show producer’s wishes). There was also a song written by Potger about Lightfoot.

COVID restrictions, plus the absence of a bar licence, kept the punters quiet, but did not prevent them reveling in the beautiful lyrics and entrancing melodies. They were told they were allowed to hum, but not to sing! A fitting end to the hugely enjoyable evening saw the encore being the show title song (and one of Lightfoot’s most passionate works) Sundown.