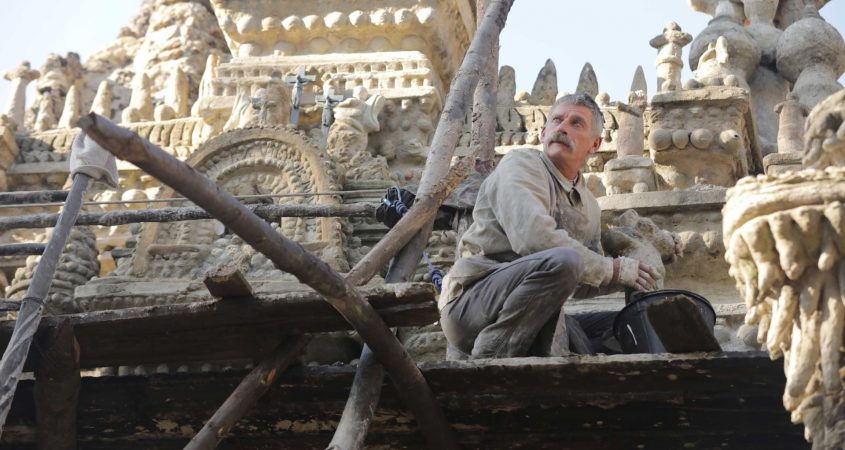 The Ideal Palace commences with the funeral of the first wife of a 37-year-old shy postman, Ferdinand Cheval (Jacques Gamblin), who submits to an uncle’s decree that relatives living far away in Paris should care for his now motherless young son, Cyrille (Louka Petit Taborelli).

Six years later, Cheval is walking his daily 18-mile postman’s delivery route in a remote rural location in Auvergne-Rhône-Alpes, when he meets a widow, Philomène (Laetitia Casta). They soon marry and have a daughter, Alice (played as a young girl by Zelie Rixhon, and as an older girl by Lilly Rose Debos).

Cheval, inspired by magazine pictures of Asian temple architecture, decides to build Alice a palace from the unusually shaped stones he finds on his route. Cheval works as a postman for ten hours a day, and on his palace for another ten, in all weathers. His commitment and dedication are astonishing.

The Ideal Palace’s entire cast has been perfectly selected, but, in particular, Jaques Gamblin brilliantly portrays a very unusual man, Ferdinand Cheval (1836 to 1924). And Laetitia Casta sensitively brings to life Cheval’s second wife, whose remarkable love for her husband stems from a rare understanding, acceptance, patience, and commitment.

The cinematography captures both the minutiae of their isolated lives and the changeable grandeur of the landscape, cleverly revealing the changing seasons that mark the passing of the years and underscoring Cheval’s utter dedication to fulfilling his artistic vision.

In The Ideal Palace, life’s joys are gently revealed, along with the difficulties  and devastating regret a man can have who loves deeply but by nature and through grief is undemonstrative. This film also depicts the power of love to motivate extraordinary acts, and the ability of the human spirit to triumph over every obstacle, internal and external.

This captivating film is sure to stay with you for a long time.