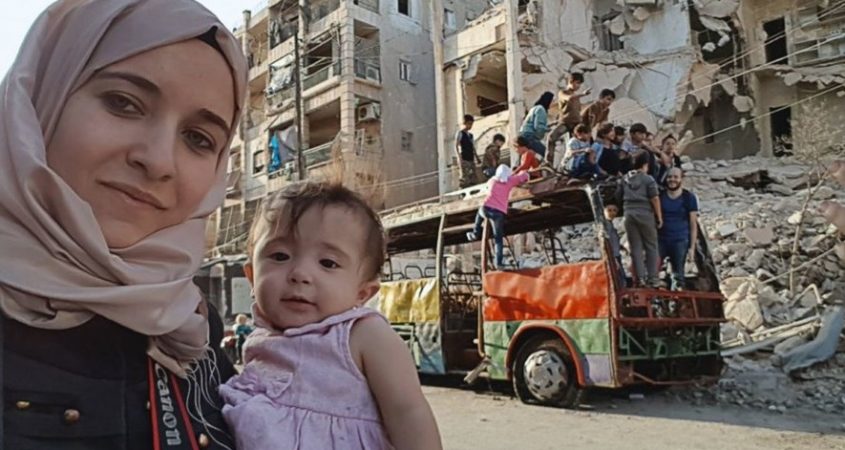 Journalist Waad al-Kateab was an economics student at Aleppo University at the start of the 2011 war President Assad waged upon his own people. She became a documenter, capturing the devastation on camera.

In this time, she also met and married Hamza, a doctor who chose to stay in East Aleppo to assist with the humanitarian response to the crisis, and they had a child together (the Sama of the title).

Waad met with an experienced documentary film-maker, Edward Watts, in 2016 and together they pieced the footage from Aleppo into a feature-length film, For Sama. Rather than addressing the audience with the story, Waad and Watts instead chose to change the format of the film into a letter to her infant child.

The contrast, of reporting on world affairs (within a dangerous war zone) with the personal safety of the reporter, is drawn into a sharp ray of light when a child with no say in the matter is also a part of the situation.

And this is the major catalyst for success in For Sama, as it immerses the viewer into the foreign situation in an empathetic fashion. The experiences presented are highly confrontational – in particular, the many scenes shot within the hospitals of Aleppo will have a major impact.

At this stage of the review, I feel the need to be upfront about two things: 1) I am not a parent, and 2) in film festivals over the past decade, I have seen numerous documentaries immersed in Middle East war zones.

The reason for my reveal is to quantify the main criticism I have for the film. The editing in some parts of the movie, particularly in the second half, left the movie feeling less important or urgent. It dwelled on some situations a little too long, and it felt like the director’s emotional attachment to the material conflicted with the need for a more consistent narrative. I was slightly removed from the film at times, whereas I found a more personal connection with many other recent movies I have seen about the conflict (again, those with children of their own may feel differently).

Nevertheless, I am enthused that a documenting of the war experience in Syria is getting a cinema release in Canberra. Nominated for the Documentary Oscar (and, at the time of writing, a contender for the win), For Sama is a strong example of the power of cinema to bring awareness of global issues to a Western audience far removed.

Support Travis Cragg on Patreon!
11% complete
When we reach $500 per month we will begin the official BMA Podcast. This will include interviews with some well-known musicians and artists, tips and tricks for publishing in print and online, as well as other discussion topics around Bands, Music and Arts in Canberra!