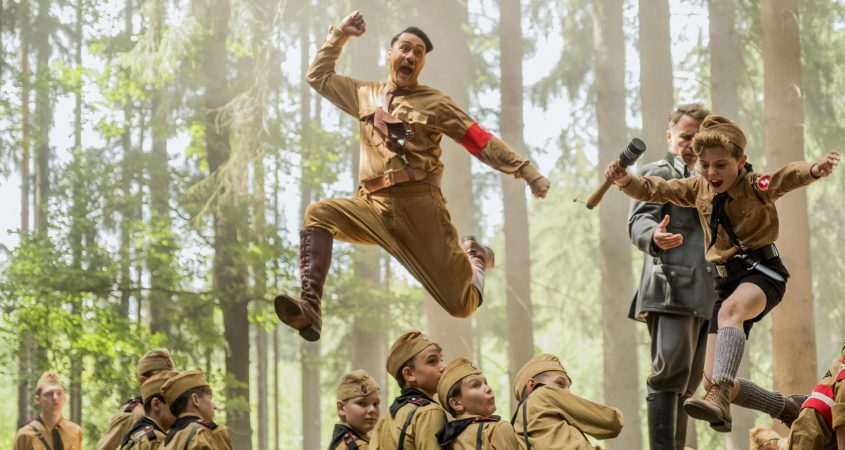 In 1943 Germany, 10-year-old Jojo (newcomer Roman Griffin Davis) holds imaginary conversations with his idol, the nation’s dictator, one Adolf Hitler (Taika Waititi).  The values that Jojo’s membership in the Hitler Youth demand are not natural to him; beneath his need for recognition as a tough young man lies a latent sympathy with the virtues that his mother, Rosie (Scarlett Johansson), lives.  Rosie herself suffers internal conflict, as a Resistance member compelled to keep from her young son a deadly secret: Elsa (Thomasin McKenzie), the Jewish girl she has concealed in their home.

Jojo’s eventual discovery of Rosie’s secret leads Elsa to have a humanising effect on him through the urbane observations with which she challenges the childish views he has uncritically adopted of Jews, and the imperviousness that a boy even of his tender years shows to Elsa’s gentle irony speaks volumes about the senselessness inherent in “adult” prejudices supported by the firmest of convenient evidence.

It’s all the more interesting, then, that Jojo finds an unexpected mentor in the Hitler Youth trainer Captain Klenzendorf (Sam Rockwell).

Taika Waititi is becoming familiar to many as a source of subversive cinematic humour with a serious intent.  Through his direction of Jojo Rabbit, Waititi has pulled off a very neat achievement.  It’s a film that demonstrates surprising understanding of the confusions that lead a youngster to embrace the values and violent ideals of racial hatred as well as showing the depth of humanity of the victims of such attitudes.  It even suggests how the uber fascist himself could justify his position to himself.  And naturally it uses offbeat humour to demonstrate the hollowness of such justifications.  First and foremost, though, the film uses five strong leads as vehicles for insight into the potential in all of us — even, at moments, the potential in the character of Jojo’s mostly affable imagined Hitler — to transcend our differences and become giants in spirit.